You're Wondering Now - The Specials from Conception to Reunion 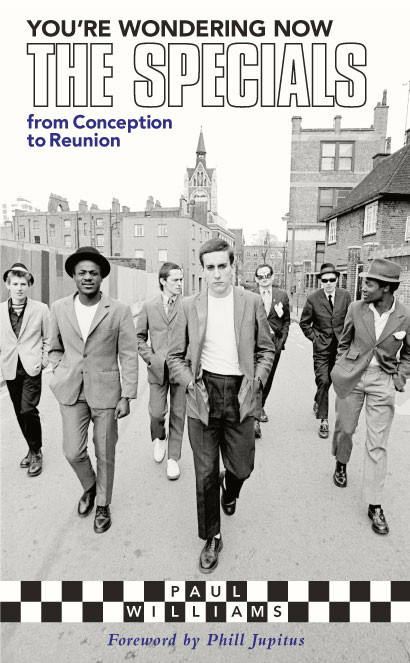 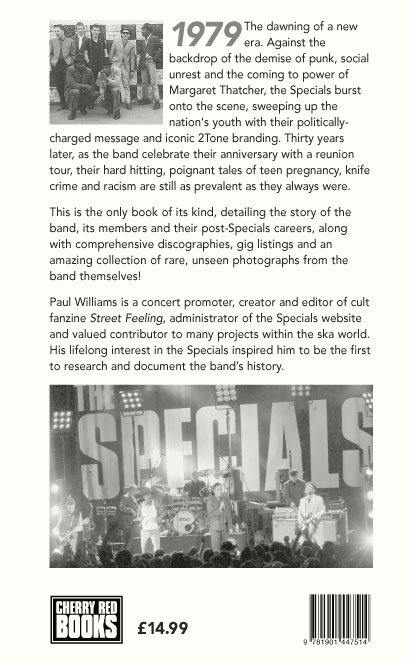 Paul Williams, not content with having written the best and onliest history of The Specials until Horace's "Ska'd For life", has gone and done it all again, only better...

This 30th Anniversay Edition of "You're Wondering Now - The Specials from Conception to Reunion" boasts a foreword by Phil Jupitus, looks back to Jamaica at the origins of ska, follows the rise and fall of The Specials and their story from the 1981 split to present day including an in-depth look at each band members' subsequent musical adventures, covers the story behind the 2009 reunion of the band minus Jerry along with testimonies of fans and artists as to why this group just won't let them go.

Once again we have a detailed discography, a great new rarities & bootlegs article provided by our Jason, a comprehensive gig guide from 1977 to 1981, (which is the first one I've seen published anywhere), a brand new caricature from Nick Davies (of Specials Illustrated Songbook fame) and the whole book is peppered with priceless behind-the-scenes photos from Roddy's personal collection.

Paul writes passionately and unashamedly as a fan, and covers almost everything that a fan would want to know about the band. Even us diehards will find a few nuggets of info that we didn't already know. He's fully behind the current reunion believing 6 out of 7 ain't bad, and whether or not you agree, I believe his book, perhaps alongside Ska'd For Life, will form the definitive account of the band for may years to come.

This edition seems a world away from the original ST Publishing version. Was it always your intention to update the original?

From the beginning, I was surprised that nothing had ever been written about them - and wanted to set about redressing that. I was and always will be indebted to George Marshall at STP. Without sounding harsh in any way, the editing wasn't precise in some areas and some facts were jumbled and in the wrong places from where I had put them. It was only a small thing in the scale of things I suppose but it meant something to me. Overall I was pleased with it but I always promised myself that should they ever attempt to reform I would love to do an updated version that had a bit more of a wow factor if you get my meaning.

How did the Phill Jupitus foreword come about?

Phill as you know is a huge ska fan and an ardent fan of The Specials. He possesses a passion for the music that shines through and he was my first choice. I was a little horrified when I found out about him doing the intro to Horace's book but that was down to me being slow to get him involved originally. So I contacted him anyway and we went from there. I plodded on with it and he was more than happy to help out and promised it wouldn't clash with the Horace one. A few mails and phone calls later he was done and he came out with a cracker. I am ecstatic over it. A great job.

After years of the standard promotional shots of the band it's great to see so many unpublished photographs. How did you manage to get hold of them?

I was intending on doing a big 2Tone project for the 25th Anniversary. I wanted to find as many unseen pics as possible because like most people, I was fed up of seeing the same old same old pictures being touted around. At one point, Virgin Books were going to publish a 25th anniversary publication IF I got Dammers on board so I had a meeting arranged with Jerry Dammers where we were going to go through his stuff in London - Imagine that!!!! I was excited like a kid at Christmas I can tell you- but Jerry got cold feet, uttered something about not putting his name to it, and it fell away which was a shame cos it was my idea. I was pretty gutted because that could have been unbelievable. However, I had become good mates with Specials guitarist Roddy Byers and he gave me unlimited access to his albums. He was fantastic.So I scanned them and kept them for posterity, knowing that one day I would unleash them on the public in one form or another. Its so good to be linked to such a prestigious company like Cherry Red - They have been excellent and once they saw the pics, they were blown away by them. Game on!

Is there anything which you would have like to have included in this edition but for whatever reason didn't make it?

I put in all that I had wanted to apart from more info on people like Dick Cuthell, I put out feelers everywhere but nothing was really forthcoming. Cherry Red have published the full monty that I had originally submitted and for that I will always be thankful. I would have liked more photos, especially from the Chalkie Davies shoots, but it wasn't to be for various reasons. Having said that, publishers are wary of too many pics because not many like publishing "photo" books so I think what I have now is just right.