Dawning of a New Era

The Coventry Automatics AKA The Specials 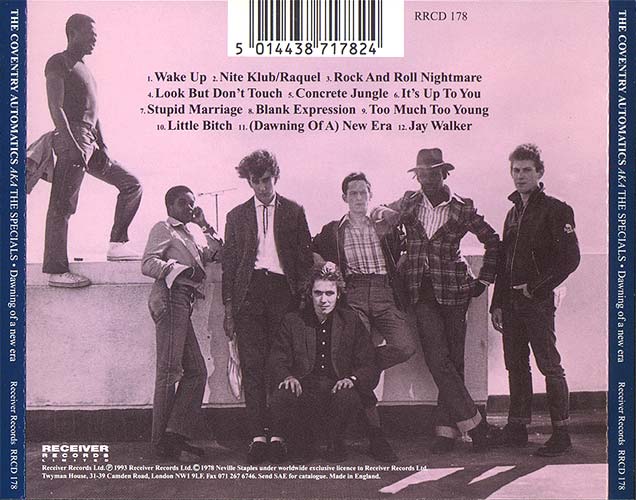 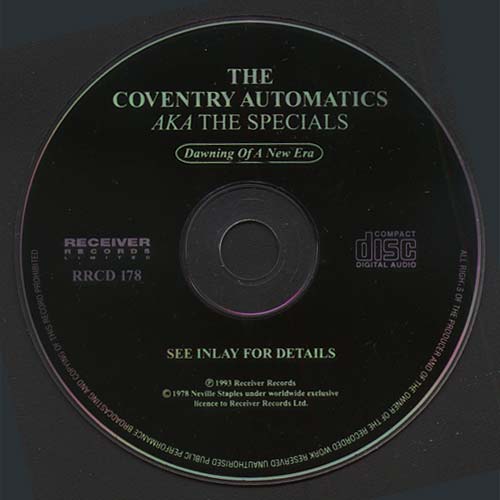 These recordings were doing the rounds for quite a few years on the bootleg market but finally gained official release in 1993 courtesy of Receiver Records, who seem to have cornered the marketing in releasing live and rare recordings which appeal to the hardened fan. Terry Hall said that he was less than happy with the release of the recordings and thought they should have remained under wraps.

Of the 13 tracks which appear on the release only Wake Up, Look But Don't Touch and Jay Walker failed to make it on to any official release and were dropped from the bands live set early in their career. The remainder of the tracks offer embryonic versions of tracks which make up the bulk of the bands first album. Rock and Roll Nightmare would later appear on the bands More Specials under the name Pearls Cafe abet with slightly different lyrics and minus the "It's all a load of bollocks" sing-a-long chorus line. The track Raquel appeared on the b-side of the Dutch Concrete Jungle single and later was released in session version as part of the BBC Radio Sessions album.

Throughout the recordings Terry Hall appears to vary from his trademark deadpan delivery with varying degrees of success such as the bizarre high pitched squeal of "Kiss me, squeeze me, kiss me" during "Rock and Roll Nightmare" and we can only wonder what he was trying to achieve with his delivery of Too Much Too Young. Terry vocal talents (or lack of them) didn't go unnoticed by future pop Svengali, Pete Waterman. The band were involved with Waterman in and around the period which these demos were recorded and although he was impressed with Terry Hall he had this to say: "Terry taught me an important lesson as a record producer; Terry can't sing. But what he does have is an unusual voice and the public love an unusual voice".

One other point of interest about these recordings is that they include the bands original drummer, Silverton Hutchinson, who left the band just prior to the recording of Gangsters.