That Man Is Forward 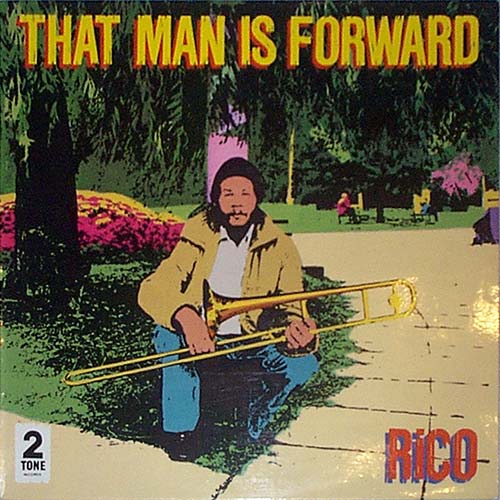 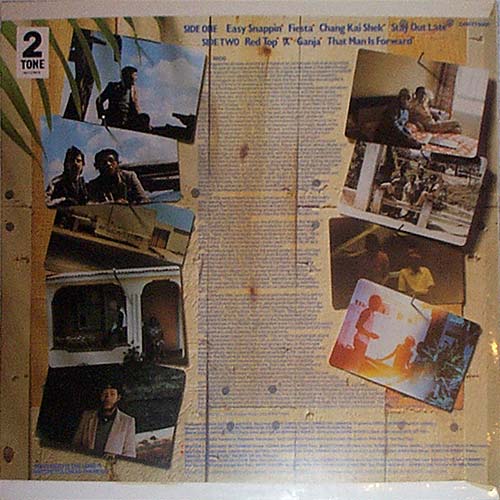 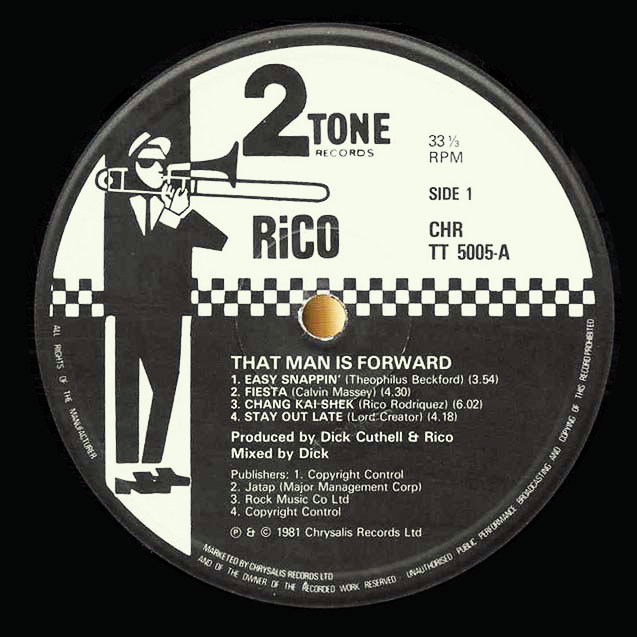 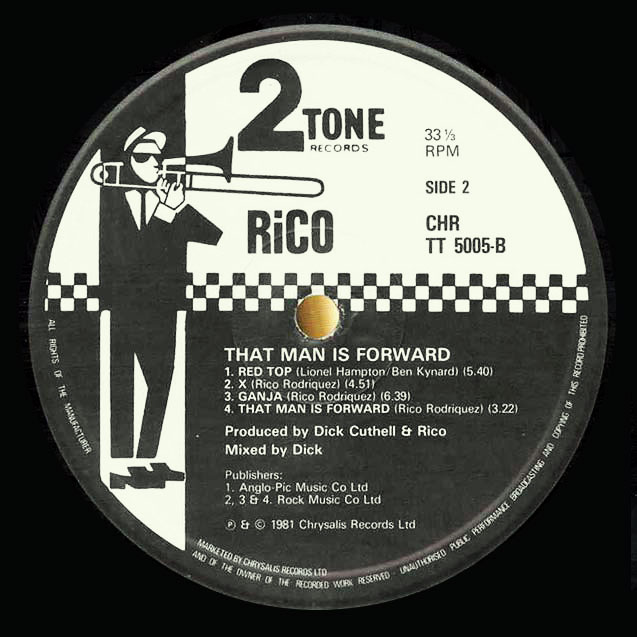 Reggae has already excerted an influence on rock music out of all proportion to the size of Jamaica and its population, but a great deal of the island's postwar popular music remains obscure. Its origins, and the successive transitions from ska to rock staedy to reggae, will doubtlessly be subject to study by musicologists as jet unborn, but we have the Two-Tone ska revival to thank for lifting the lid and revealing at least a part of the treasure. Rico Rodriguez's experience embraces the entire recent past of Jamaican music, and we are lucky to hear hin today with his own group, with the Specials, and on a variety of recordings, for he has intimate connection with the music from it's beginnings to the most recent deveopments.

Born on October 17, 1934 in Mark Lane, Kingston 2, from 1940 to 1952 he attended the Alpha Boy's School, a catholic institution which places a heavy emphasis on musical tuition. It might be said, in fact, that the Alpha School was responsible for nurturing the first generation of graet Jamaican musicians; from its classrooms came the trombonist Don Drummond (who was undoubtedly the leading Jamaican musician until his tragic death in the late '60s), the trumpeter John "Dizzy" Moore, and the saxophonists Lester Sterling and Roland Alphonso (Alphonso attended the Stoney Hill Industrial School; see Brian Keyo's Tribute to Roland Alphonso, B.), who went on collectively to form the horn section of the Skatalites, the finest of the Ska instrumental groups.

Rico himself was a member of extremely gifted trombonists which included Drummond, Carlos Malcolm, Rupie Anderson, Vernon Muller and Carl Masters; those who attended the Alpha School were encouraged to pass their knowledge on the younger pupils, with the result that Drummond and Rico became fast friends. The primary influence on these men came from jazz, and Rico cites in particular the popular group led in the early '50s by two great American trombonists, J.J. Johnson and Kai Winding. The impact of jazz can be heard on two pieces on this album, Charlie Parker's "Fiesta" (originally recorded by the master altoist in 1951, with a latin-tinged arrangement) and Lionel Hampton's "Red Top", which was a R&B hit for the tenor saxophonist Gene Ammons in 1947, although Rico says he first heard it by the Jamaican big band of Jack Brown, whose sidemen included Carl Masters and the fine tenor saxophonist Wilton "Bogey" Gaynair.

The '50s were a heady time for Jamaican music, an era of discovery. After leaving school and serving a brief apprenticeship as a mechanic Rico joined the Cuban-influenced dance band of alto-saxophonist Eric Deans ("he had big following among white middle-class people"), while playing for kicks at clubs like the Glass Bucket, the Colony and the Silver Slipper.

Rico got a break when he won the £ 10 first prize on the Vere John Opportunity Hour, a live show hosted by a white journalist which provided the only local radio exposure for unknown local artists. "Vere John was aware of the problems in our society," Rico remembers, "and he used to have this show on Saturday nights. After I'd won I couldn't enter again, so he used to have me on as a guest artist. The crowd was always behind me."

Rico also began to record for soundsystem men, who had become producers. Prince Buster, Count Boysie, Clement Dodd, Duke Reid and others. In 1958, though he entered into a more important relationship; he went to live in the Rasta community presided by Count Ossie at Renock Lodge in Wareika Hills, where the music played by the group which became known as The Mystic Revelation of Rastafari was far from the commercial mainstream. "They're more developed, mentally and musically, than the average musician," Rico says. "When you play with them you can really explore. Most of what I know I learned from playing with them."

In January 1961, sick of persuation and sufferation, Rico left for England, where he launched himself with some success into the London Club and recording scene, playing with Red Price, Georgie Fame and J.J. Jackson, and eventually recording two albums under his own name: "Come Blow Your Horn" (Blow Your Horn was released in 1969, B.) and "Rico in Reggaeland" (Pama 1967) (Reco in Reggaeland, most probably released also in 1969 and re-issued as Tribute to Don Drummond in the late 1990s, B.). Neither record represented what he considered to be his music, though, and the financially straitened circumstances of the British reggae scene were not sufficient to support him, so he took day jobs: in a gas works, on the production line at Ford's in Dagenham, and as a painter for a local authority.

His new dawn began in the middle '70s, when he signed with Island Records and went to Jamaica to cut an album, "Man From Wareika", which reawakened interest in lost glories of ska. In Rico's new arrangements, the jazz-inflected horn flourishes of instrumental ska were carefully reconciled with more recent rhythmic matrix of reggae; the album was well received, prompting a memorable series of appearences with his own band. The resurgence of activity led directly to his association with the Specials, which found him in the charts, on "Top Of The Pops", and touring all over the place. At last receiving the respect and rewards which had long been his due.

This album continues the good work, providing a clear view of his highly personal conception while serving as a vehicle for the expansion of his horizons. The musicians are the cream of the Jamaican scene with one important addition: Jah Jerry, who arrears on a couple of tracks is the original guitarist with the Skatalites, but had not played seriously for 16 years before these sessions. In a way, that sums up Rico's intentions: to use the best of the new while remainingmindful of older lessons. He puts it this way: "I like to do different music every night, but we have never been a trendy styl of musician who leaves the roots for money or whatever. The kind of musician I am. I do a lot of research ... you need ideas, new inspiration. Music is an exploratory thing. I can't stop that." 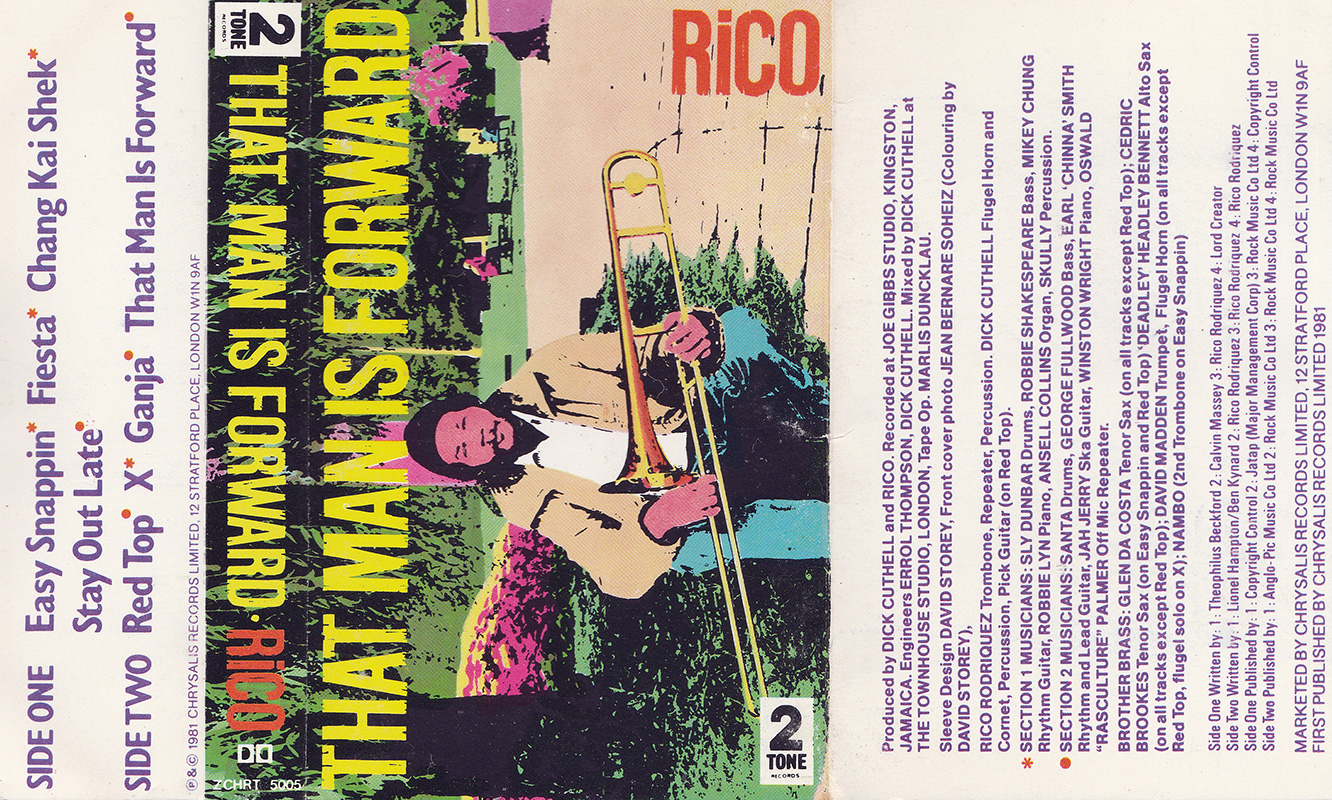 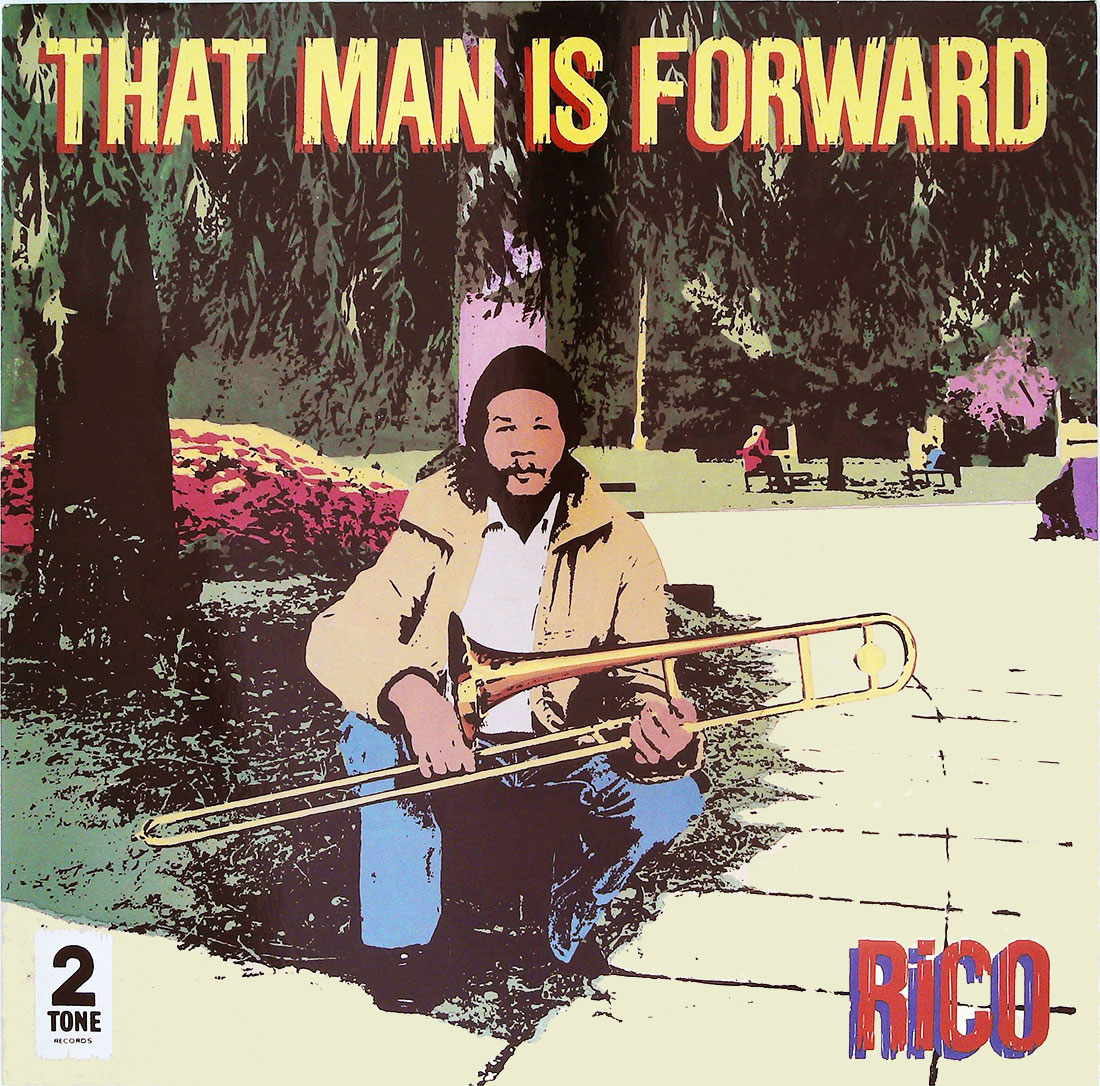 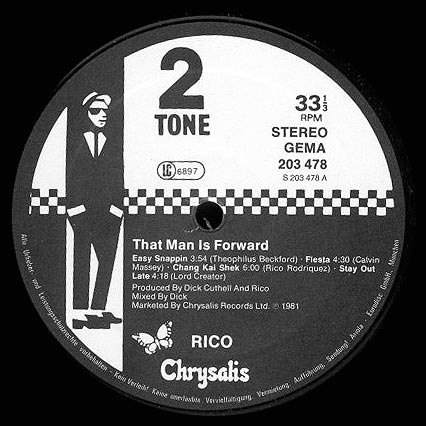 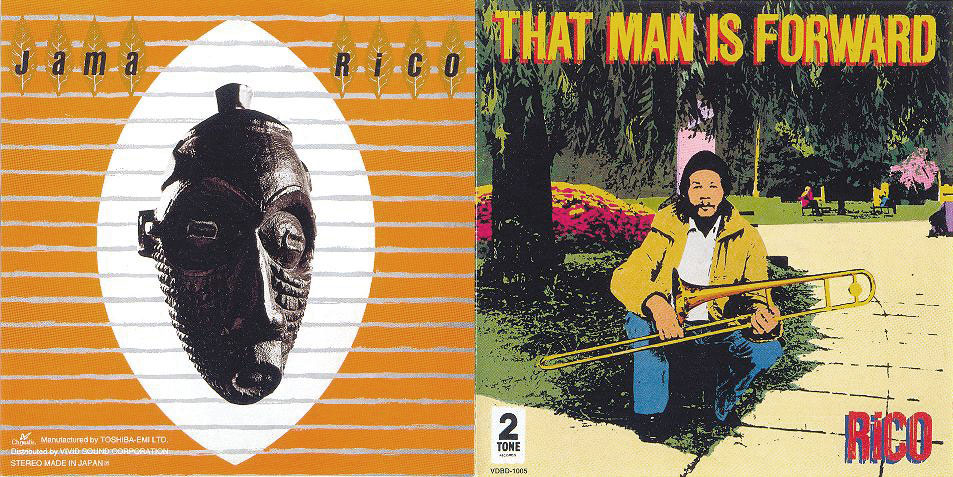