The Specials, Madness and the Ska Explosion 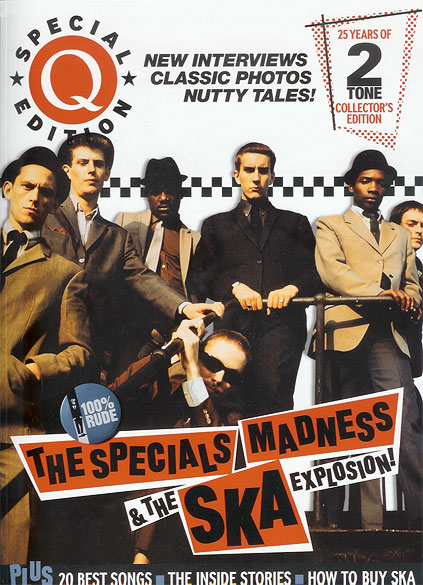 Q Magazine periodically release a Special Edition in which a particular artist or genre is featured. Past specials have featured the likes of David Bowie, The Who and Punk, so with the coincidence of a 25th anniversary Q released an edition titled 'The Specials, Madness and the Ska Explosion' and a highly comprehensive account of the ska revival it is too.

From a great introduction by Suggs to the rather sombre conclusion by Jerry Dammers, the magazine features just about everything any fan of the label could ever wish to read. All the main bands of the period are included, although no member of UB40 was interviewed, which is a shame because their debut album 'Signing Off' is rightly included as one of the essential sound tracks to the period. Each band gets a sizable section of text, which includes some much needed new insights and anecdotes (of which there are many) from all of those involved.

2 Tone was as famous for it imagery as it was for its sounds and the section on the artwork of the label reveals that the stark simple design for the label most definatly did not happen by accident. Designer Dave Storey recalls that Dammers did not suffer fools gladly and paid meticulous attention to every detail, but it was all done 'with a smile on the face'. It will also come as no surprise to many that Beat/Go Feet designer Hunt Emerson confesses that he based the Go-Feet imagery on 2 Tone.

The film Dance Craze gets a 2-page feature, where all various parties express mild indifference at best to the project. The other 'blockbuster' of 1981, Take It or Leave It gets a nostalgic but 'don't give up your day job' type write up, with keyboard player Mike Barson admitting that it was 'really naff' but 'historically it got it right'.

Terry Hall is interviewed extensively for the magazine and comes across as unusually upbeat about The Specials and 2 Tone. He admits that a recent health scare has changed his outlook on life and seeing The Pixies but him in mind for a Specials reunion; a can of worms which many feel should have been left alone.

Among the other sections of the magazine are articles on the introduction of ska and reggae to the UK, a piece on the essential fashion of the time, a top 20 collections of original ska albums, a where are they now section, to name but a few. The list of contents goes on and on with the quality of writing, not to mention photographs, rarely failing to impress.

The magazine concludes with an article by Jerry Dammers in which he comes across as someone who has yet to get over the break-up of a band and idea, which he admits, was in the planning from when he was 10 years old. He restates his account of the Specials split, recalls the numerous bands which he played and finally reveals that Prince Buster does indeed receive royalties from Gangsters.

There are a few careless mistakes in the magazine which eagle eyed readers will no doubt spot, such as referring to Ghost Town as The Specials 'sole chart topping single' and Rico's Jungle Music somehow being elevated to album status, but these in no way take away from the overall appeal of the magazine.

Outside of the UK / Europe the feature was issued under the MOJO Magazine title.