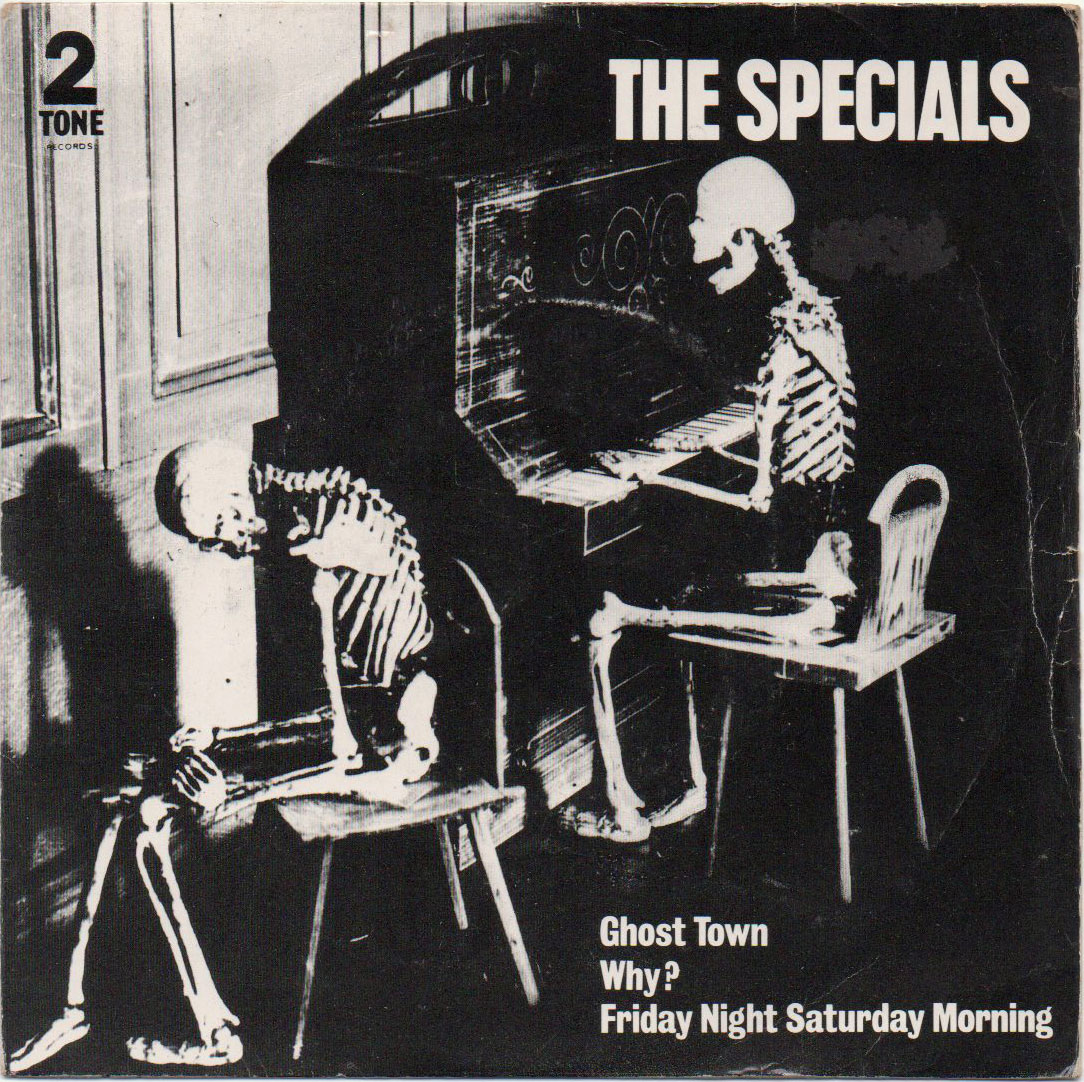 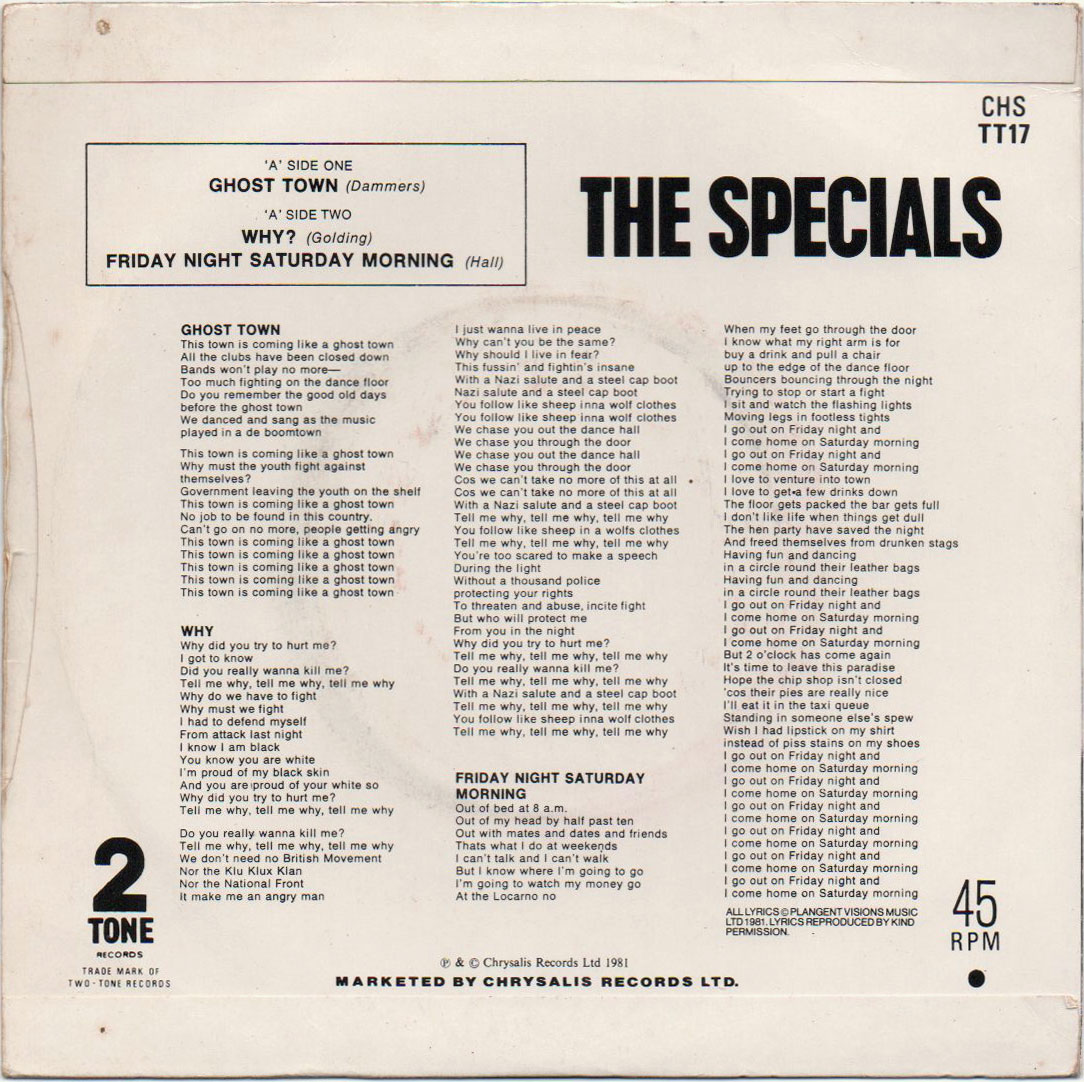 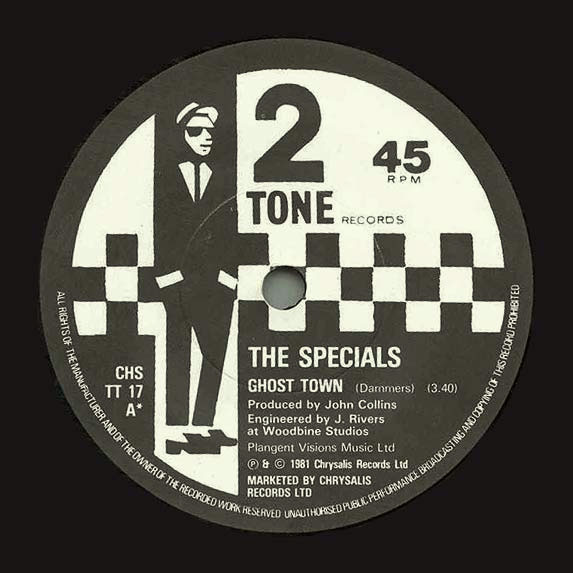 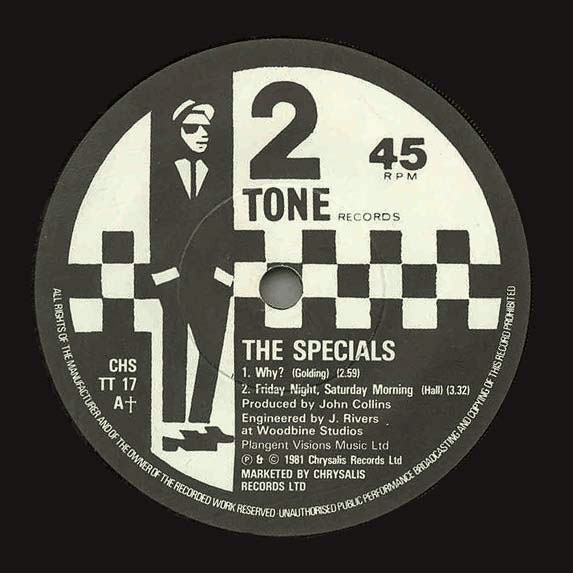 Side 2
Why?
Friday Night, Saturday Morning

Ghost Town marked the pinnacle of the labels achievements. Critics have called it "one of few singles to reflect perfectly a period in history" and "one of the most important records of our time". Released at a time when Prince Charles and Lady Diana were about to marry and inner city riots swept Britain the single summed up perfectly the irony of the whole period. It stayed on the number 1 spot for 3 weeks and became the label's first single to sell a half a million copies and also marked the first UK 12 inch from 2 Tone.

With the exception of Dance Craze and the release of Rico's 'That Man is Forward' album 2 Tone had been very quiet throughout the first half of 1981. However, friction was becoming apparent within the Specials camp. According to Terry Hall the recording of the single was dogged by bad feeling among the various band members even getting to the stage were they wouldn't go into the studio together. The arrangements of the singles' others tracks also caused ill feeling. Terry Hall would have preferred his composition Friday Night Saturday Morning to have consisted of just him and a piano in a pub sing-a-long type fashion but in the end he had to make do with version which was released.

Dammers had been impressed by John Collins production of the Victor Romero Evans single 'At the Club' and decided he was the right man to help steer a very unsteady Specials ship through the recording process of what would be the band's final single. Having previously sent a demo tape to 2 Tone with no success he initially thought the request to produce the band was some kind of joke.

Wanting a back-to-basics reggae feel, Dammers booked a small 8-track studio in Leamington for a 2-week recording session where the band took - what for them was - the unusual step of breaking down individual components of the song and then layering up multiple tracks. Previously the band had played more or less live in the recording studio, but the parts of 'Ghost Town' were recorded individually and the track was to be given the studio time it deserved. John Collins commented that it was probably just as well, as the band members would not have all fitted into the studio at once anyway.

The Detonators 'Lift Off' from the B-side of 'At the Club' provided the inspiration for the track's fade up intro, complete with whistling wind sound effects. Then, with Terry's toasting removed and Rico's solo reserved for the 12" version, a further 3 weeks mixing was required at the producer's house in Tottenham, London before the final version was ready for release.

Housed in a picture sleeve based a '60s sound effects album entitled 'Sounds to Make You Shiver', the three tracks from the session: Ghost Town, Why? and Friday Night, Saturday Morning were released as yet another well-deserved double A-side on the label

With a number one single on their hands Chrysalis Records pushed the boat out and produced a video to accompany the song. In usual 2 Tone fashion it was a very simple video which involved the band squeezed into one car driving around what appear to be empty roads. More interesting are the 2 Top Of The Pops appearances the band made to promote the single. Both performances saw the band expanded to a 11 piece which included Rico, Dick Cuthell, Rhoda Dakar and ex-Swinging Cat, Paul Heskett on flute. It was obvious from these appearances that the band had dropped the trademark tonic suits and crops in favour of more 80s casual look. A few months later 3 band members dropped the band altogether and that was the end of The Specials but not 2 Tone. 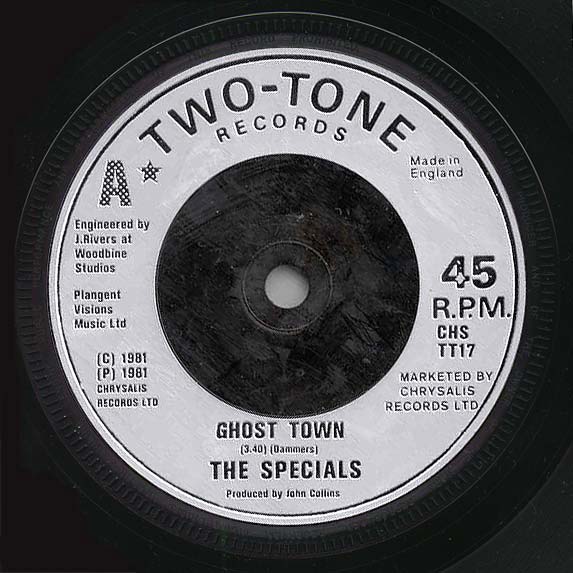 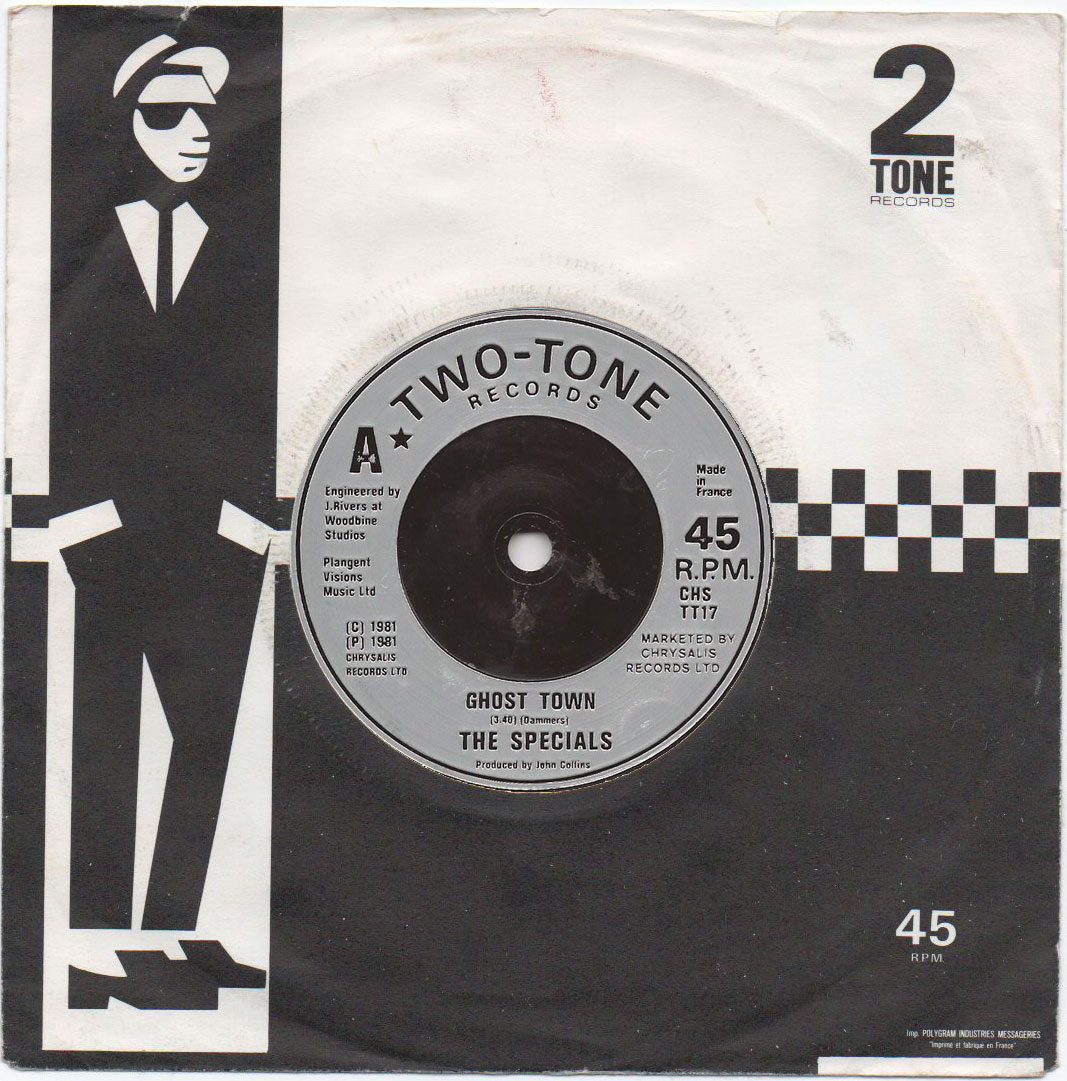 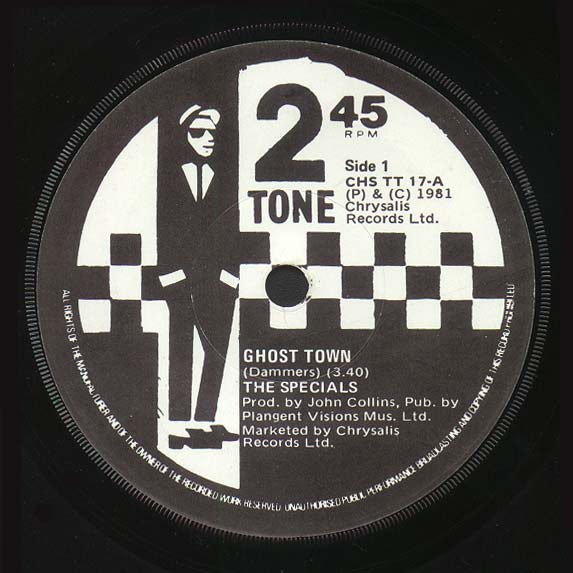 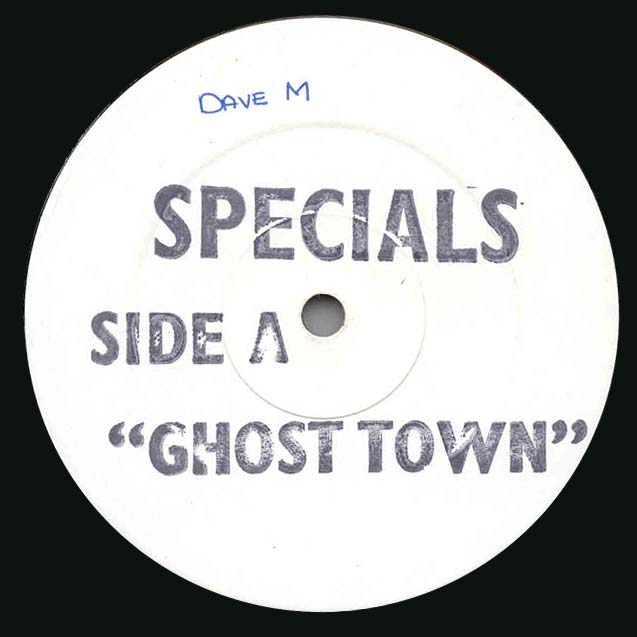 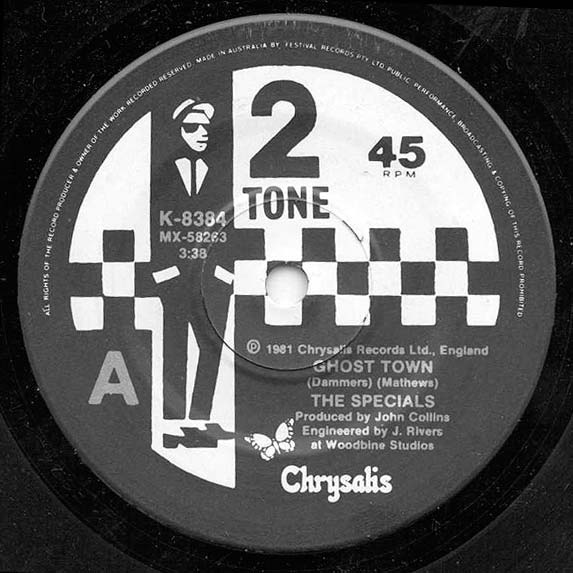 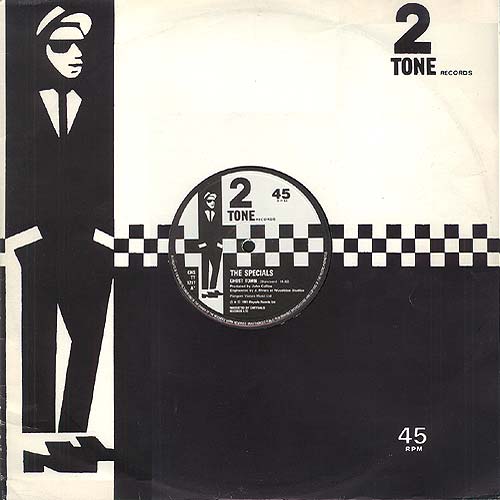 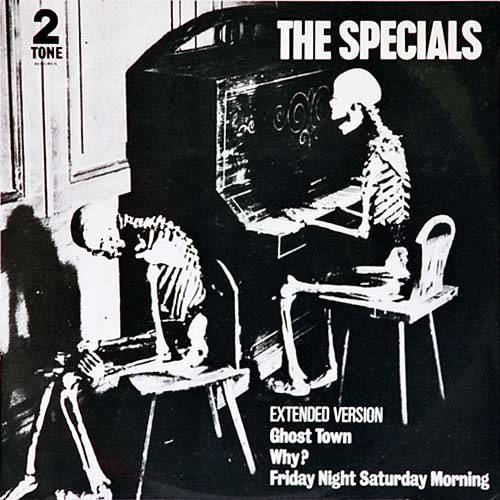 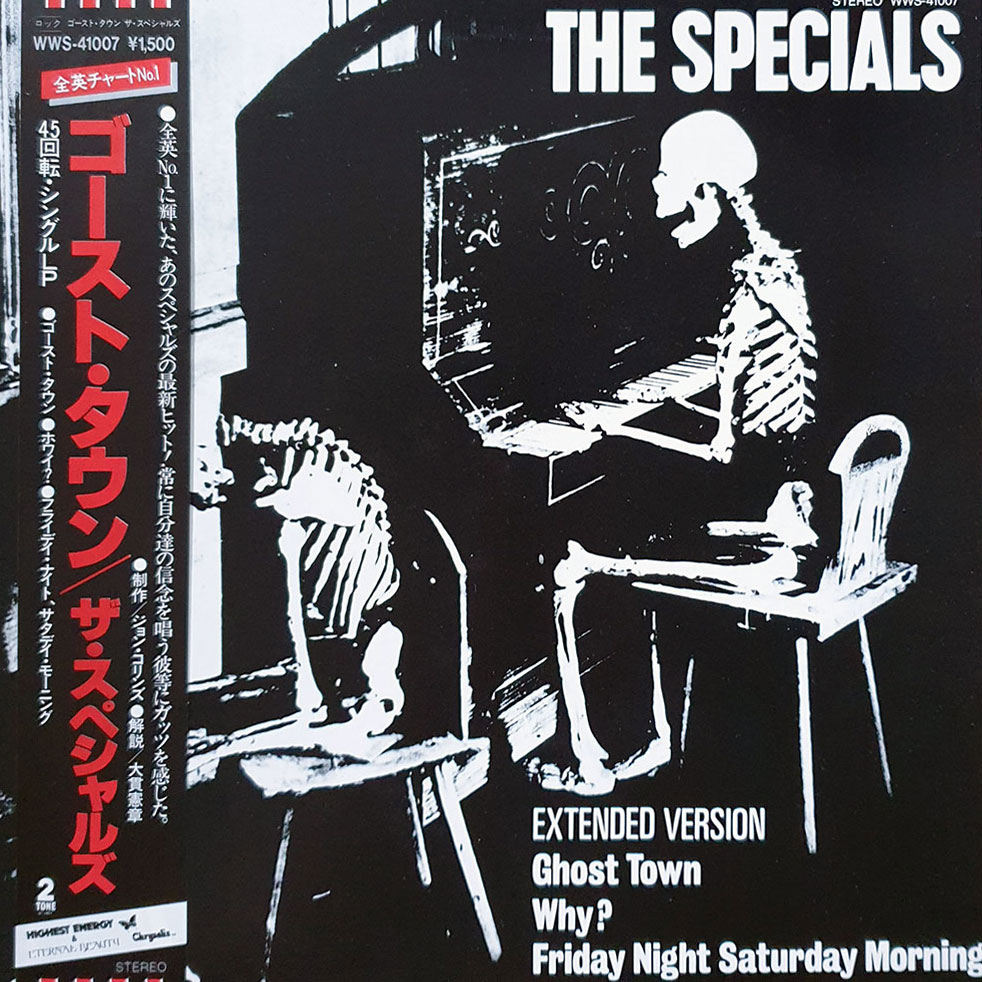 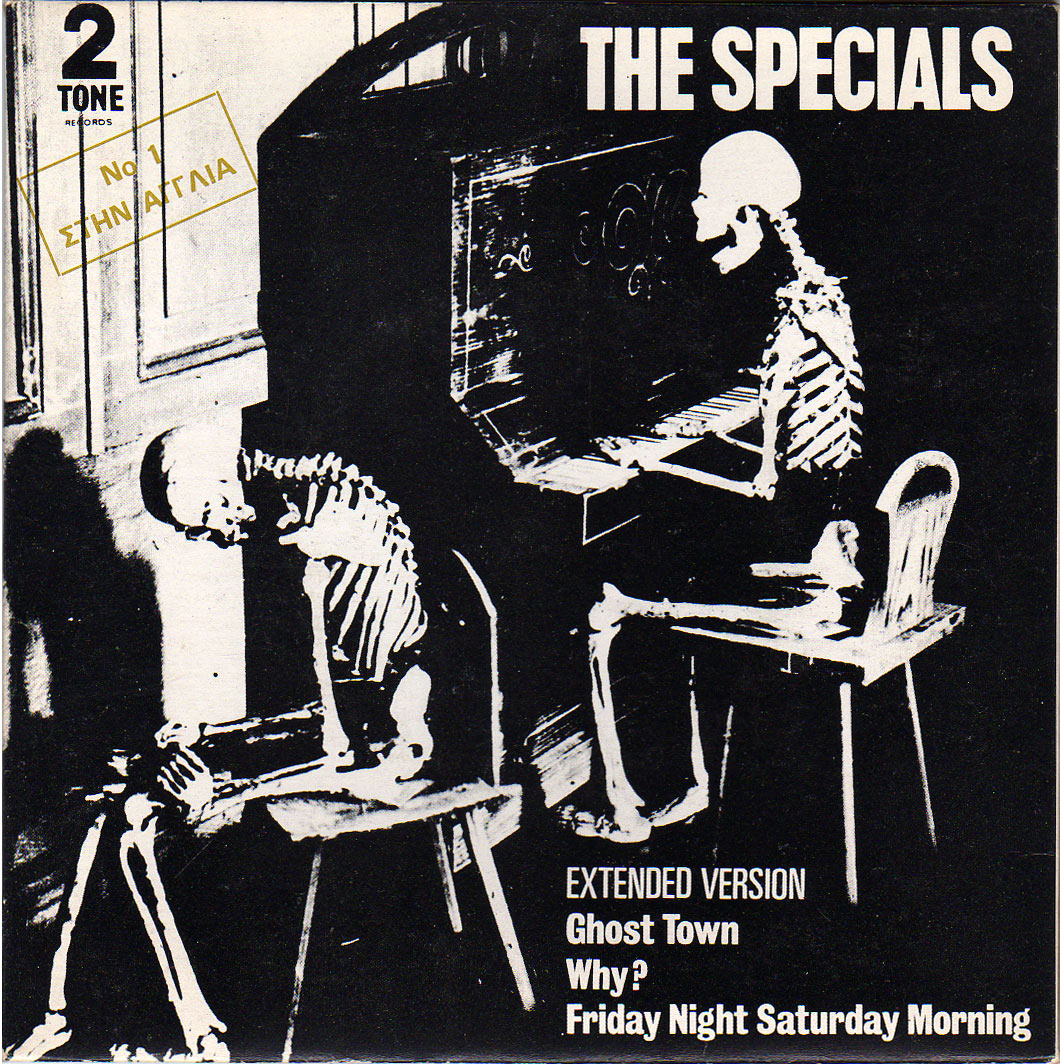 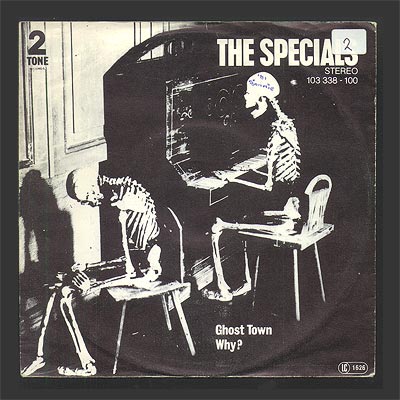 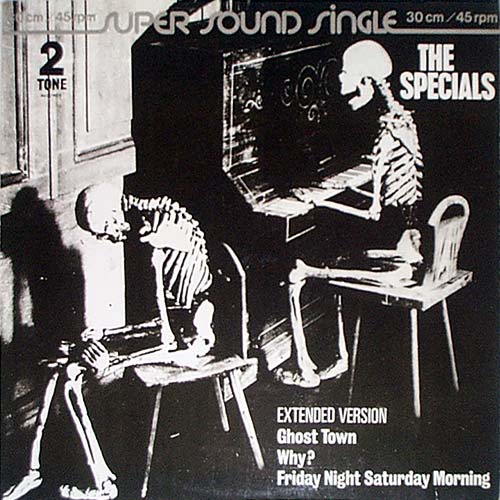 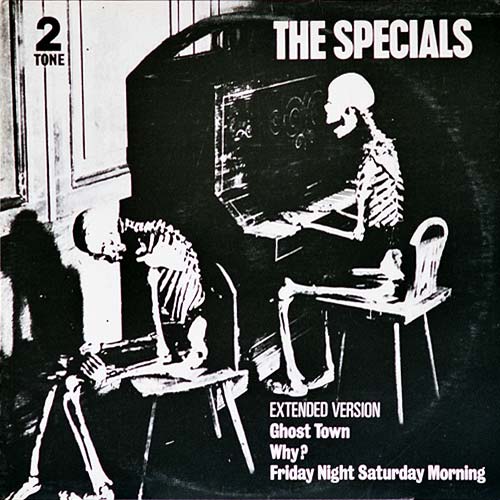 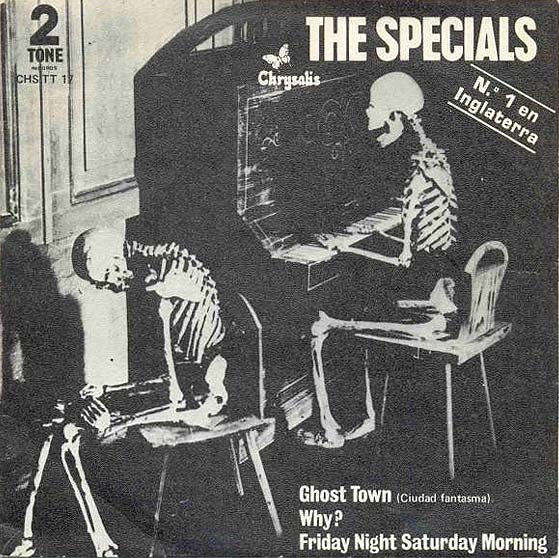 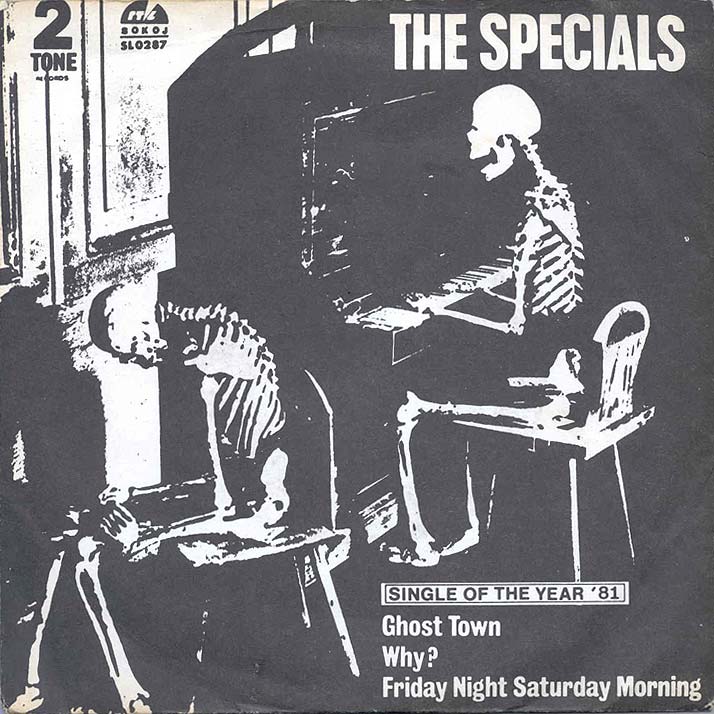 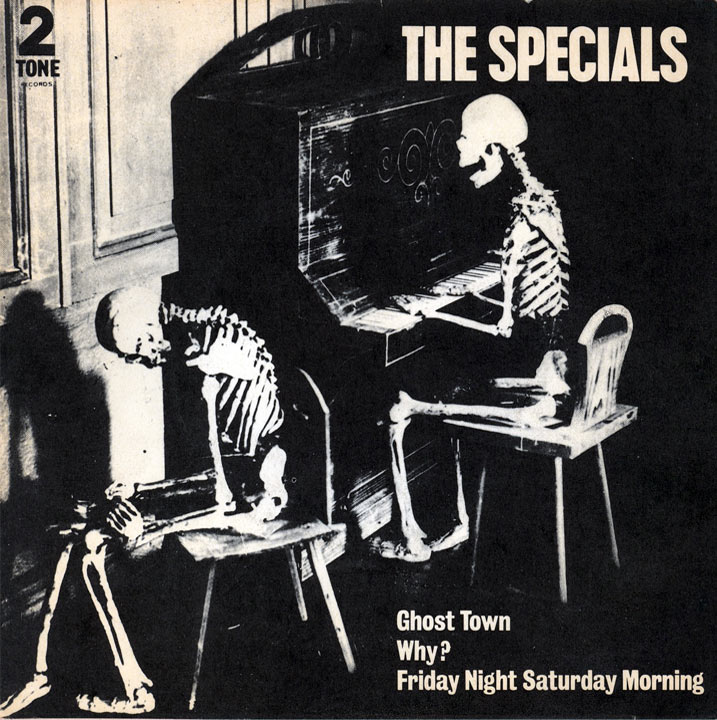 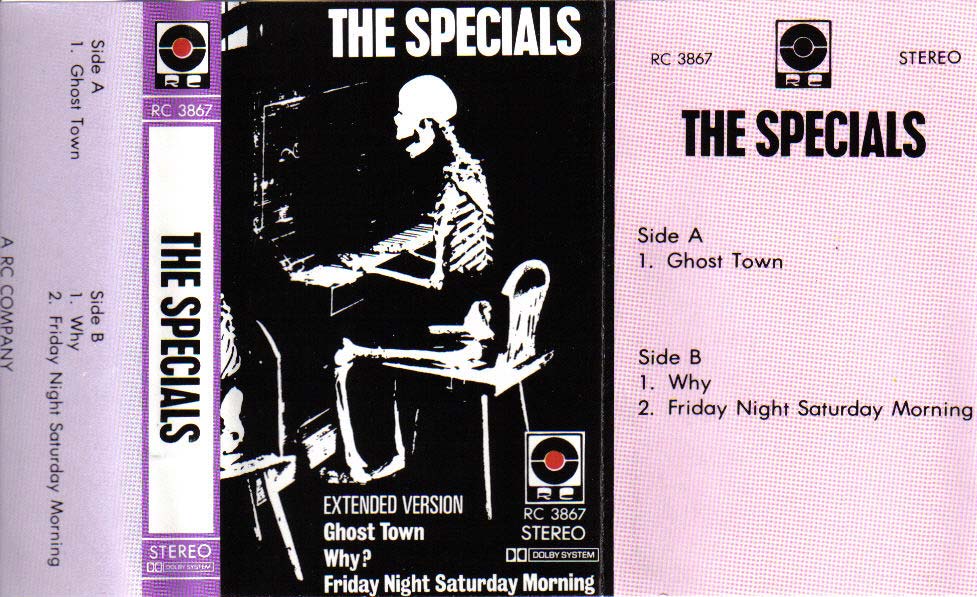 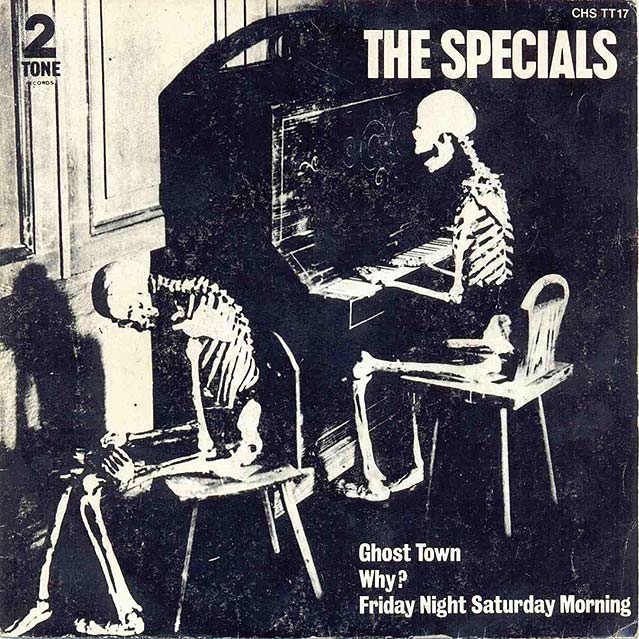 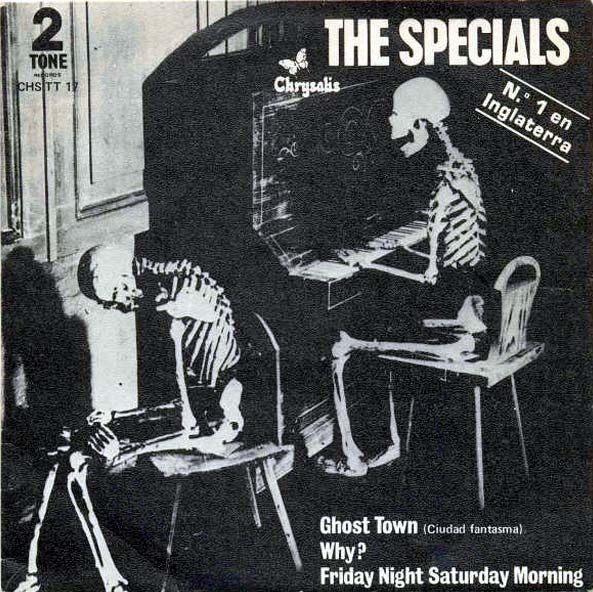 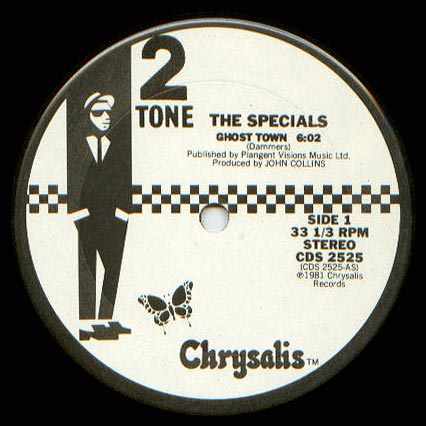 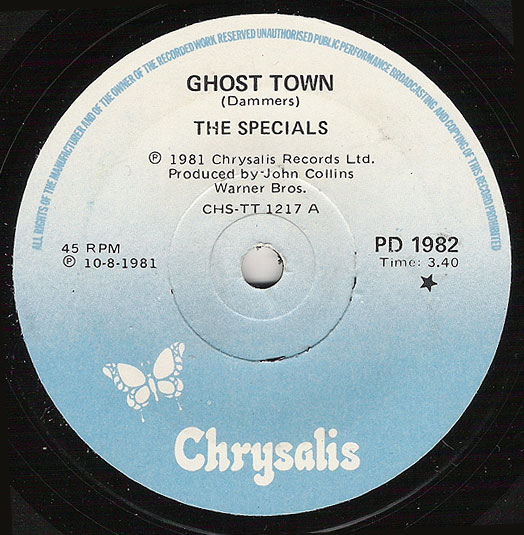 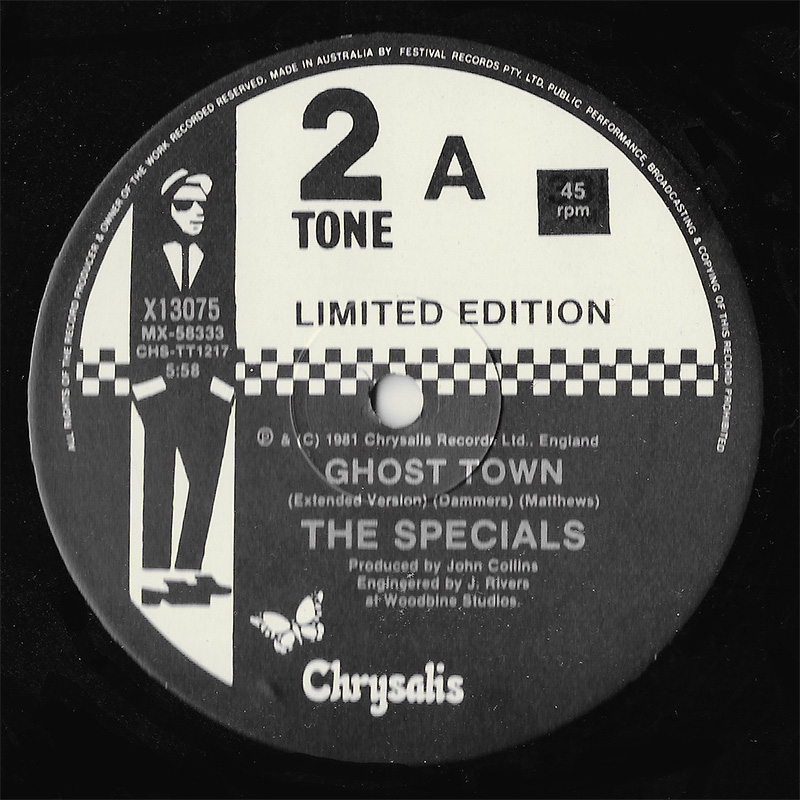 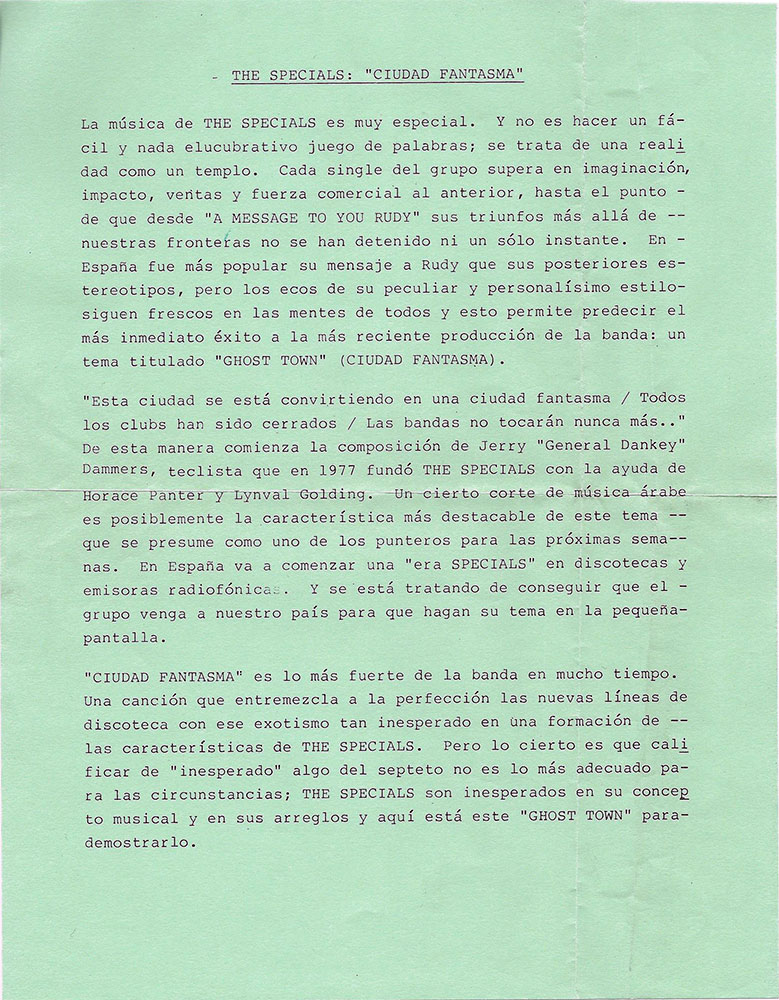