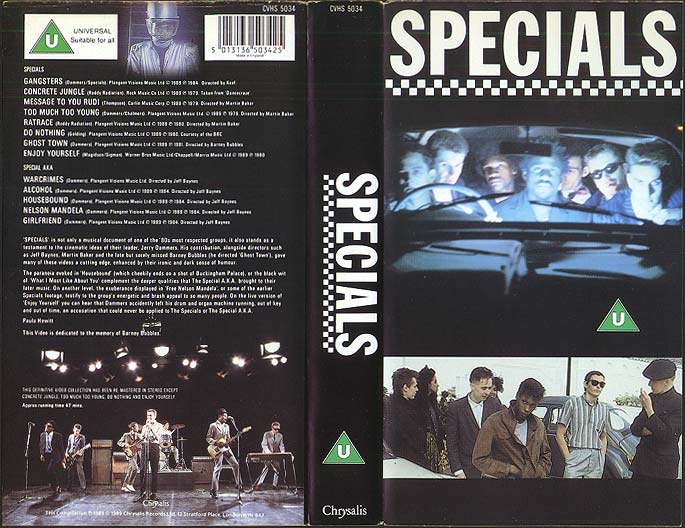 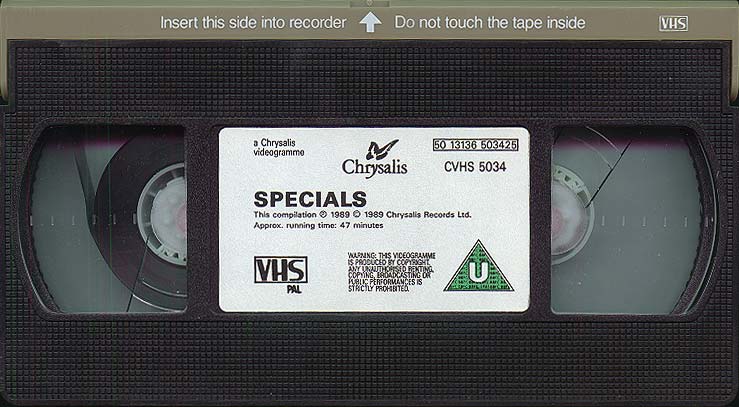 Gangsters
Concrete Jungle
Rudi, A Message To You
Too Much Too Young
Rat Race
Do Nothing
Ghost Town
Enjoy Yourself
War Crimes
Alcohol
Housebound
Nelson Mandela
Girlfriend

'SPECIALS' is not only a musical document of one of the '80s most respected groups, it also stands as a testament to the cinematic ideas of their leader, Jerry Dammers. His contribution, alongside directors such as Jeff Baynes, Martin Baker and the late but sorely missed Barney Bubbles (he directed 'Ghost Town'), gave many of these videos a cutting edge, enhanced by their ironic and dark sense of humour.

The paranoia evoked in 'Housebound' (which cheekily ends on a shot of Buckingham Palace), or the black wit of 'What I Most Like About You' (sic) complement the deeper qualities that The Special A.K.A brought to their later music. On another level, the exuberance displayed in 'Free Nelson Mandela', or some of the earlier Specials footage, testify to the group's energetic and brash appeal to so many people. On the live version of 'Enjoy Yourself' you can hear that Dammers accidently left his drum and organ machine running, out of key and out of time, an accusation that could never be applied to The Specials or The Special A.K.A.

This Video is dedicated to the memory of Barney Bubbles