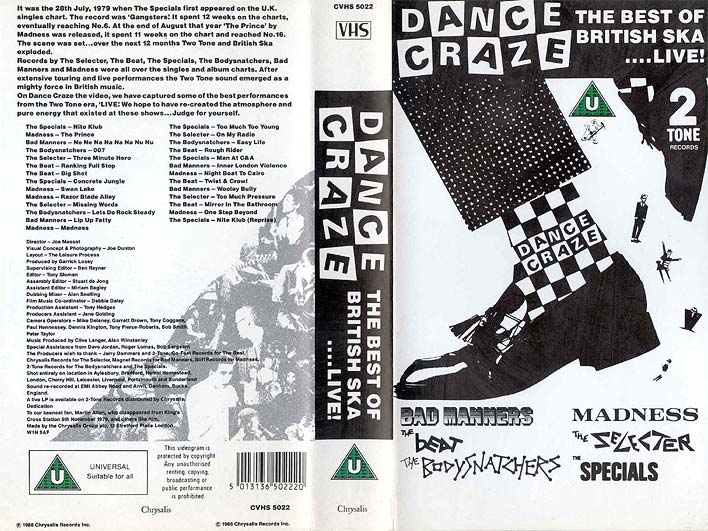 The 27-track VHS of the film was finally issued briefly in 1988. The performances were shot entirely on location in Aylesbury, Bradford, Hemel Hempstead, London, Cherry Hill, Leicester, Liverpool, Portsmouth and Sunderland.

There had been talk a 2 Tone film for some time and it was American director Joe Massot who finally set about the task of capturing the 2 Tone bands on celluloid. He had originally intended to make a film solely about Madness after a witnessing the band live in Los Angeles, but his son Jason persuaded him that there were similar sounding bands and that he should expand the film project to include the entire 2 Tone movement.

Massot was no stranger to working with bands, he had previously directed the Led Zeppelin film, The Song Remains The Same, and he set about to try and capture the energy and enthusiasm of 2 Tone on film. For the technically minded among you it was shot on 35 mm and blown up to 70 mm. It also gave Massot an opportunity to try out what was then new technology, the SteadyCam, of which he said "I wanted to try it out with Ska to see if the camera could dance. It positively strutted its' stuff". He filmed what he said was a "countless number of concerts" and tried as best he could to capture the atmosphere at these gigs. The next task was that of selecting footage which would produce the best representation of the live 2 Tone experience.

Jerry Dammers worked exhaustively on the film to the point were it was reported that he nearly had a nervous breakdown. Despite this workload the completed film was previewed in January 1981 at the Midam Music Festival in France and opened in the UK on February 15th of the same year. However, by 1981 2 Tone had lost its appeal and only the most die-hard of fans ventured to their local cinema to witness the nations finest in action. It didn't exactly fall into the blockbuster category and most cinemas only screened it for a week or 14 days at the most. Had Dance Craze been filmed and released 12 months previously it would have been a huge hit but only a minority of 2 Tone fans remained and the film soon sank into obscurity.

No fan of the bands can fault the 27 tracks contained in the film. Each band is on top form and the film does indeed go some way to capture the atmosphere of those shows, but what the film does lack is some sort of insight into 2 Tone or the Ska revival in general. A few backstage interviews and a brief history of the label would have worked wonders for its appeal but what was on offer was old movie reel clips of past dance crazes such as the twist sandwiched between 2 sections of uninterrupted concert footage. The only exception to which are the fight scenes for 'Too Much Pressure' filmed at a studio in Wembley, London and the short clips of ballet dancers and stomping Dr Martens during 'Swan Lake'.

Although the film was given a U Certificate (suitable for all) Pauline Blacks' expletive during 'Three Minute Hero' and Terry Hall's critique of the 'Nite Klub's' beer both managed to slip through the censors net.

According to promotional material released at the time the bands were filmed as follows: