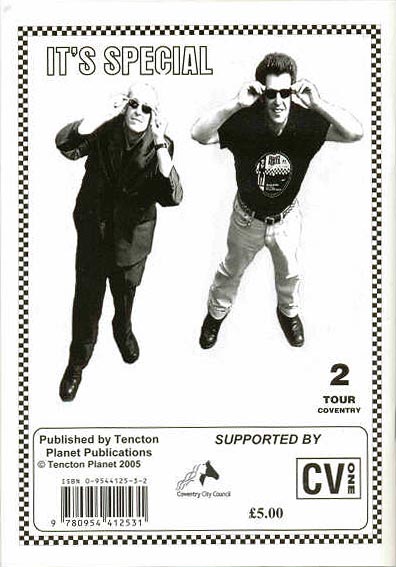 The 2-Tone Trail is a wonderful new book by Coventry local Pete Chambers, that looks at the places and the faces that helped to shape 2-Tone. Full of rarely seen photographs and very interesting titbits of info, the book features a 20 location tour around the city, and each one is brought to life by quotes from the likes of Jerry, Horace, Roddy, Lynval, Neville, Pauline, Roger Lomas, Neol Davies who also contibutes the foreword. There are 20 sites on the main trail, including the likes of The Lanchester Poly, The Canal Basin, Tiffany's, 51 Albany Road and The Domino.

The booklet reads well with details of the importance of venues along the trail, and photos of places past and present including some that are sadly no more... Whether or not you ever get the opportunity to tread these hallowed streets, the book is well worth the (very reasonable) fiver, and forms another important resource for those of us curious about the details behind the label and it's protagonists.

The booklet also contains some great photographs which will be of interest to those with more than a passing interest in the label, such as the original photograph (in its unedited state) used for the Specials debut album. The photograph was taken at the Canal basin in Coventry, and also included is a photograph of the basin as it is today. Terry Hall wearing what can only be described as a dolls outfit is just one of the photographs included of the Coventry Automatics.

The final pages of the booklet are taken up with ads (a few from pubs which are included on the trial itself) and offer the reader a wide range of services, from pub food to vintage fishing tackle.

You can purchase the book directly from Pete at his own website at http://rocksgodiva.tripod.com/2tonetrail/ which itself features an exclusive and very interesting interview with JD.