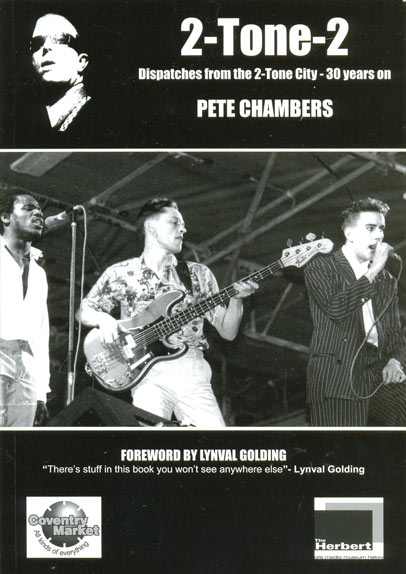 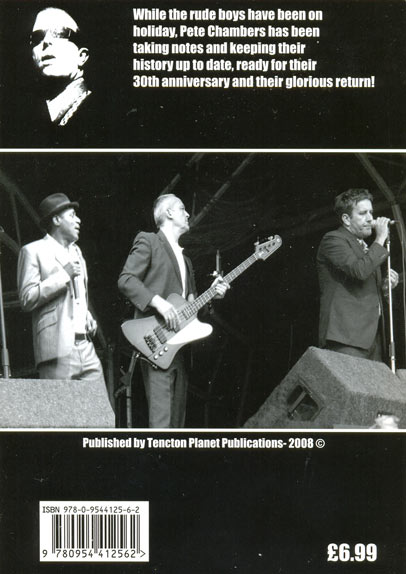 Pete Chambers offers up an expanded version of his previous publication, The 2 Tone Trail under the title of 2-Tone-2, Dispatches from 2-Tone city - 30 Years On. The book is split in to two sections of which the latter half is a faithful reproduction of The 2 Tone Trail, expanded to include some previously unseen photographs of the 2 Tone faithful. Those of note are the series of unpublished photographs famous Coventry canal basin photo shoot and another curious one, although not of the greatest of quality, in which Jerry Dammers appears to have front teeth.

The first section of the book is a collection of articles by the author, some of which have be taken directly from his Backbeat column for the Coventry Evening Telegraph; a newspaper which itself has historical links with 2 Tone, not least because an article lifted directly from it was reproduced on the rear sleeve of the labels first UK number one single, Too Much Too Young.

Included is an excellent article on the unsung 2 Tone pioneer, Ray King, who unwitting laid the foundations of the sound which would define a late 70s Britain. King performed in many bands that will be of interest to historians of the label, such as Night Train (of which a rare onstage photo is included) and Pharaoh's Kingdom (of which a truly horrifying group photo is included). Both bands included future Specials and Selecters in their line-ups and rightly deserve their place on the 2 Tone family tree.

There is more than just a hint of a partisan approach to Coventry band The Enemy with numerous attempts to draw parallels between them and the Specials. And with the bands front man, Tom Clarke, stating: 'I was never a big fan of The Specials', there will be those wondering why so much space in a book about 2 Tone was handed over to them in the first place.

Articles on the likes of Dammers collecting his Honorary Doctorate from where else but Coventry University and accounts of the glory days of 2 Tone from less obvious participants such as Swinging Cat, Paul Heskett and James Mackie from the Celebrate the Bullet line up of The Selecter should be enough to satisfy the curiosity of most fans of the label. While the large section of the book which deals with the recent Specials re-union will no doubt keep the debate alive as to the rights and wrongs of something which every fan of the band has an opinion on.