I Just Can't Stop It: My Life in the Beat | Ranking Roger and Daniel Rachel | 2 Tone Records

I Just Can't Stop It: My Life in the Beat 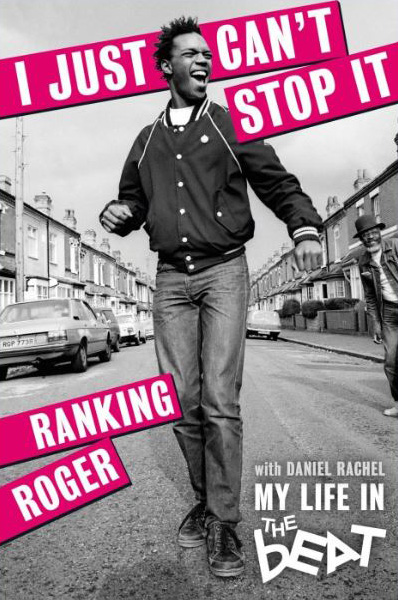 After his excellent telling of the 2 Tone story via his book, Walls Come Tumbling Down, music author Daniel Rachel teams up with Ranking Roger to co write the front man's autobiography.

Born Roger Charlery and named after British actor Roger Moore, his story begins as the son of Caribbean immigrants who like so many traveled from the then British controlled region to seek a better life in the UK. However, the reality was somewhat different with many suffering isolation and horrendous racism.

Choosing the a nickname he had at school 'Ranking' Roger had the typical upbringing of countless other working class boys from large inner city areas. A few scrapes with the law and leaving school at the first available opportunity meant Roger's life could have taken an all together different path had he not discovered his love of both punk and reggae. He played in various punk bands and was know to toast over quite a few punk records at local clubs and discos. His role in 2 Tone history could have taken a different route if it were not for a collapsing wall put end to a Specials gig just as Roger was about to toast over what must have been a blistering version of Gangsters. He also nearly became a member of UB40, but thought the punky reggae sound of The Beat was a more natural home. The UB40 connection doesn't stop there. Roger states that he latter found out that demos of both The Beat and UB40 were played on the first 2 Tone Tour bus and a vote was taken as to which band would next sign to 2 Tone.

Of interest to the reader may be how Roger states how the band wanted to distance themselves from 2 Tone as quickly as possible. The Beat were keen to see themselves as a mix of punk and reggae rather than ska and deliberately withdrew from the 2 Tone 2 Tour to create some distance between themselves and the label. It's obvious during this period they were putting their time, money and effort into their own Go Feet label (itself a 2 Tone clone), and this is where they saw their future lay. Given that a year later they were back on 2 Tone via Dance Craze it will give the reader something to mull over.

Discussing the break-up of any band usually exposes a certain amount of animosity between band members and Roger's book is no different. While he freely admits that it was both he and Dave Wakeling who pulled the plug on The Beat he is quick to point out he felt manipulated into doing so by his former band mate. He also cites changes to Wakeling personality which he traces back to a Top of The Pops appearance as a reason for the breakdown of their relationship. The episode in question is also the one where Horace Panter joins the band for a rendition of Too Nice To Talk To. Perhaps the most biting comment is Roger's description of Dave Wakeling's version of The Beat as 'Los Angels karaoke'.

The almost inevitable tales of sex and drugs are also included. While Roger is much more modest than Neville Staple was in his memoir in his retelling stories of countless groupies, his dalliance with Bangles lead singer Susanna Hoffs is a definite case of too much information. As for drugs Roger describes himself as a life long 'weed burner' with only a few dips into Class A territory. The reported $5000 drug debt the rest of the band managed to run up suggests they took a slightly more hedonistic view of chemical enhancement.

The book concludes with the story of Roger's untimely death and some heartfelt tributes. It's difficult to imagine The Beat without his unique voice and style. What is perhaps just as difficult to grasp is the fact that at the time of performing Tears of a Clown on Top Of the Pops he was a mere 16 years old.