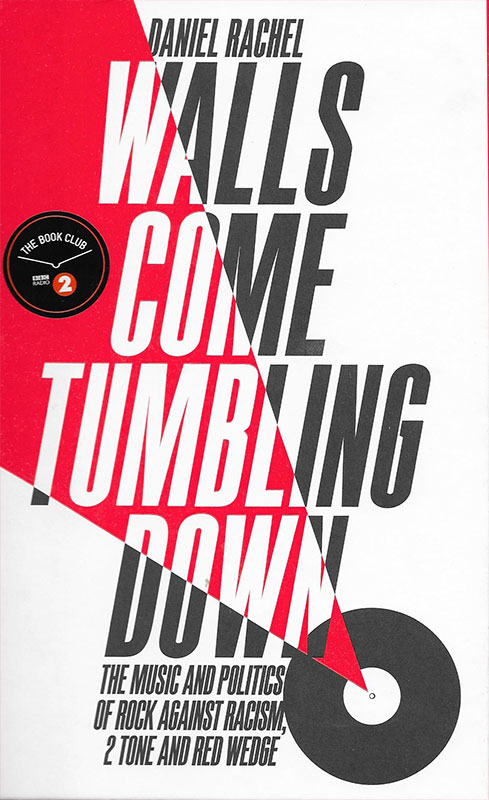 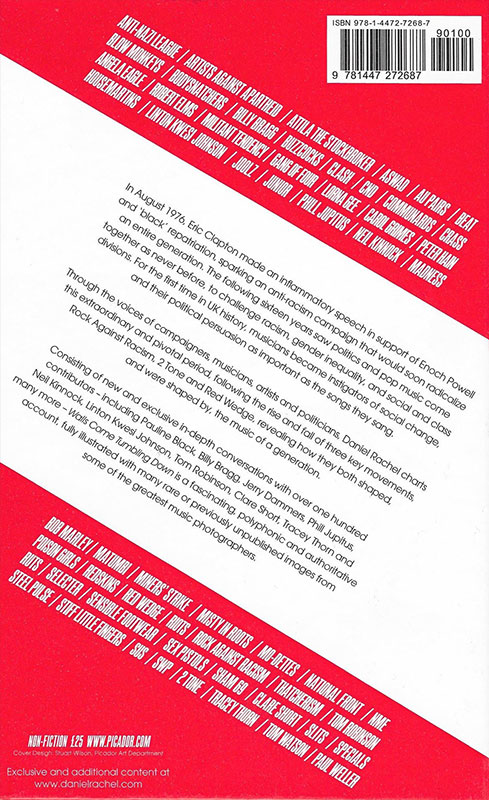 Described as an oral history of three pivotal periods in the history popular culture between 1976 and 1992 when music and politics combined to have varying degrees of success in shaping social views. The book may be split into three rather distinct volumes, Rock Against Racism, 2 Tone and Red Wedge, but the 640 pages contained within expand to cover just about every major political event during the 16 years the book outlines, such as the Miners' Strike and the release of Nelson Mandela and Artists Against Apartheid to name but a few. And with over 150 people interviewed just about every major and minor player has copious amounts of input.

The books begins with the recalling of what exactly sparked Rock Against Racism all those years ago, and that was a shockingly racist speech Eric Clapton made during a gig in Birmingham in 1976, the contents of which have been made readily available elsewhere on the internet. If readers are so inclined to source the speech they should be aware that it contains the use of some highly offensive language which is somewhat ironic given the fact that Clapton has carved out a career playing his version of the Blues and had chart success with a cover of Bob Marley's 'I Shot the Sheriff'. The Beat's Dave Wakeling happened to be in the attendance at the Clapton gig in question and dismissed him as a 'toff who didn't give a sod about Birmingham'.

The growth of Rock Against Racism is expanded upon in detail from its humble origins of a few leaflets and posters at combined punk and reggae gigs to the mass rally at Victoria Park in 1978 where attendance was in excess of 80,000. The account of the formation and rise of the Anti Nazi League is dealt with in facts rather than political doctrine which makes for a pleasant change.

The section on 2 Tone is where this book really excels. Through his interviews with such a wide range of people the author has managed to compile perhaps the most revealing and engaging account of the label to date. People like The Bodysnatchers' founding member: Nicky Summers, and The Selecter's manager, Juliet De Valero Wills, offer fresh insights and perspectives on 2 Tone, while others speak more candidly than ever before. For instance Neol Davies and Juliet De Valero Wills paint a picture of inter-personal relationships so dire within The Selecter it's nothing short of a miracle the band were able to record two albums. There is a take on the UB40-2 Tone connection from Jerry Dammers which will no doubt raise a few eyebrows amongst readers.

The chapter on The Bodysnatchers follows the rise and demise of the band in detail never before published. From their learn-as-you-go-along beginnings to the most clichéd of 'musical differences' split, Nicky Summers and Rhoda Dakar offer up countless pieces of information which for all these years have remained unpublished, such the name they almost chose for the band (The Bodysnatchers was 'the one they hated the least') and the fact that Summers was against a deal with 2 Tone branding it 'safe and predictable'. She also recounts an album and recording deal offered by Richard Branson which, even after all these years, she finds difficult to comprehend how the rest of the band could have turned it down.

Other sections on both 2 Tone Tours offer great insights into those heady days, the realities of which were often much more mundane, but none the less make for entertaining reading. Various opinions on the demise of The Specials are offered up in a often very open and honest, almost blunt, manner and shine some new light on to what exactly happened even after all these years.

The concluding section of the book deals with those who played benefit gigs for the striking miners in 1984/85, many of which admit it was their political awakening, through to the Red Wedge Tours, taking into account the often forgotten Red Wedge Women and Comedy tours. All of which ends with the chapters on Artists Against Apartheid and the various Nelson Mandela tribute gigs. Jerry Dammers and Rhoda Dakar, plus a whole host of others give their views on all of the above and discuss the impact music had in either shaping or influencing political ideals.

For the 2 Tone section alone this is an essential item for any fan of the label. One of the closing chapters of the book is titled 'Hats-Off to Jerry Dammers' which more or less says it all...