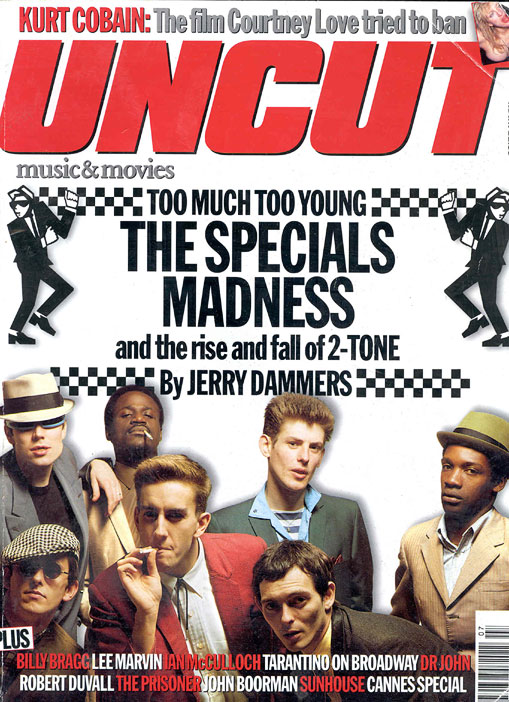 Uncut scored a major coup in securing an interview with Jerry Dammers for their July 1998 issue. Dammers had not been interviewed in any detail about 2 Tone since the labels untimely demise. He had given the occasional interview about his involvement with projects such as the Labour Party's Red Wedge Tour and Artists Against Apartheid, but had remained tight lipped about his days at the helm of 2 Tone.

The in-depth interview is spread over an impressive 14 pages in which Dammers recalls the early days in Coventry where the band struggled to combine reggae and punk, until they decided to try their hands a ska because "it had more energy and it was easier". The interview concludes with Dammers revealing his then (current) involvement with various Jungle and Rap artists. In between he recalls the highs and lows of the label, the state of ska in America (he admits he hasn't heard any of it) and discloses the sorry state of affairs with regards royalties, which are paid to The Specials.

Terry Hall, Rhoda Dakar, Chas Smash and Lee Thompson are also interviewed for the article. While the members of Madness seem to have a positive outlook about the labels achievements and their time with it, both the singing Special and ex Bodysnatcher seem to have very downbeat and strained memories of their time with the label. Terry Hall recalls that he enjoyed it for about the first "six months to a year" and more surprisingly that he "didn't really like to many of the other groups".

Rhoda talks about her time with the label post-Bodysnatchers, and its obvious to the reader that these times, and in particular the recording of In The Studio, were very stressful indeed. When asked if her 2 Tone memories were happy ones she answers with a resounding "not really, no".

Also included are brief sections on the history of ska and the state of the music in the UK, plus a selective discography in which only The Selecter's Too Much Pressure album and the Dance Craze sound track fail to gain a 5 out of 5 star rating.