Sent From Coventry: The Chequered Past of Two Tone | Richard Eddington | 2 Tone Records

Sent From Coventry: The Chequered Past of Two Tone 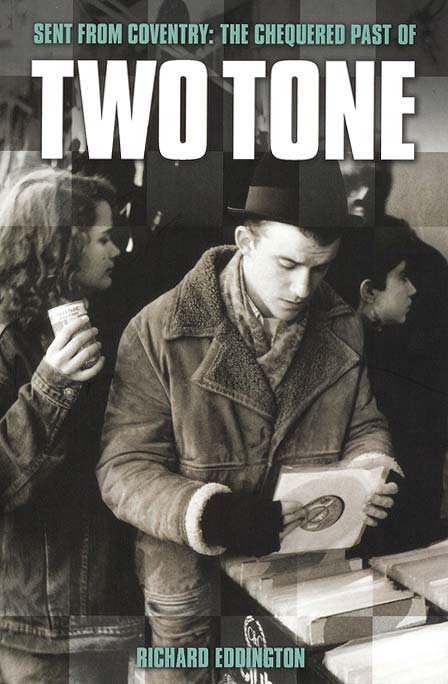 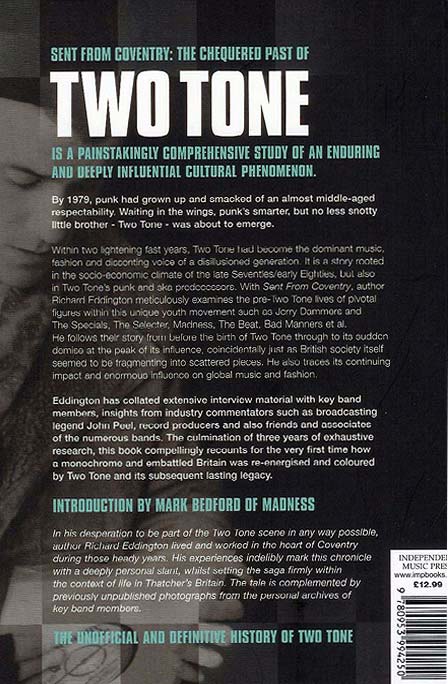 Before you read further, let us say that while we were very excited to hear there was an new tome on the label, we we're alarmed and disgusted to find that entire sections of the text from this website were plagiarised almost verbatim in this book, we have had no contact from the author at any time, and no permission was granted to him to use our research.

We have decided to include the book here as it is a 2 Tone related item, and despite our personal feelings, belongs in the archive.

The books' rear cover states rather ambitiously, that this is 'The Unofficial and Definitive History of Two Tone', and while the book does offer a few new insights into the Coventry scene from where the label was born, it falls well short of the mark of this claim both in terms of both new information and attention to detail.

To the author's credit he does set the scene in pre 2 Tone Coventry well, and attempts to explain 2 Tone in the context of a post punk Britain. The introduction from Mark Bedford from Madness is very charming, and there are some nice insights from Neol Davies, however this does not quite salvage the book from its overall lack of originality and its complete ignorance of the iconic design that was so important to the movement.

The book follows the history of the label from the days of The Coventry Automatics to its demise, with chapters either dedicated to specific bands or significant periods in the labels development. Some glaring omissions include the famed (and thankfully brief) involvement of pop mogul Pete Waterman and Andy Cox of The Beat who is carelessly omitted from the bands line up on the first page, which lists 'The Players'. A page, which oddly lists only four of the bands that appeared on the label. The author also experiences some difficulty with The Beat's discography, listing careless inaccuracies. His failure to recall such basic details as album tracks and singles serve only to make the reader question the authors' "Definitive" authority on the subject.

Only a handful of books have been written about 2 Tone and its associated bands, such as George Marshall's superb 'The Two Tone Story' and 'Total Madness' and the excellent 'You're Wondering Now, A History of The Specials' by Paul Williams. The author has obviously gleaned a considerable amount of information from these books and has rightly included them in the bibliography at the rear of the book. It's a shame that other sources of information are not so clearly stated and credited, for instance the large sections of text which he so very obviously plagiarised from 2-Tone.info. It says a lot for Eddingtons interest in the project and indeed his imagination that he should stoop to such depths as to use other people's text, virtually word perfect in some cases, without prior consent or agreement. For those of you who are interested the following are the sections of the book which have been lifted directly from this very web site.

Too Much Too Young Page 135

For a book that is said to have involved '3 years of exhaustive research' you have to wonder what exactly the author was doing during that period of time. There is little new in the book which can't be found in various other books and web sites (!!). There is a quite a feeling of 'déjŕ vu' to be experienced while reading the book, both about details, which are readily available elsewhere, and anecdotes, which have been recounted numerous times before. Plus there are what appear to be, the author's rather desperate attempts to somehow involve himself in the 2 Tone story. For instance does the reader really care if he auditioned (unsuccessfully) for a band, which some UB40 roadies had formed? Or that he also auditioned for a band that The Specials roadies were considering putting together?. But then again according to page 174 "it seemed that every band with a couple black guys wanted a singer who looked like me". And on top of this there is his unfortunate tendency to drift into his own rather childish adulation of the bands and band members.

One of the books glaring omissions is it's choosing to completely ignore the labels artwork. How anyone can write a book on the 2 Tone label and not include some of the iconic artwork and imagery is a major achievement in itself. The few photographs in the mid section of the book do go some way towards salvaging the books appeal but the reader is soon let down again by more silly errors in the discography included among the last few pages of the book.

Neol Davies, Mark Bedford and Roddy Byers all gave interesting accounts of their time with the label although the quotes from DJ John Peel are barely noticeable even though his name is mentioned specifically on the rear cover. Swinging Cat Chris Long also sheds some light on one of the labels more elusive bands. These few redeeming factors still apart, the book is far from the 'definitive' claim, instead offering a rather bland and mediocre account of the labels' story.