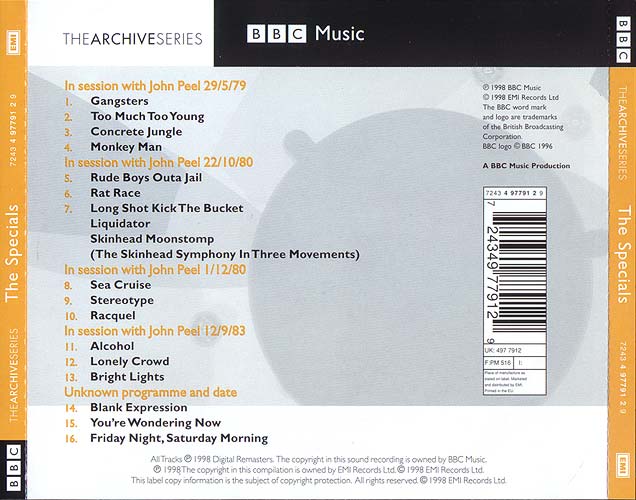 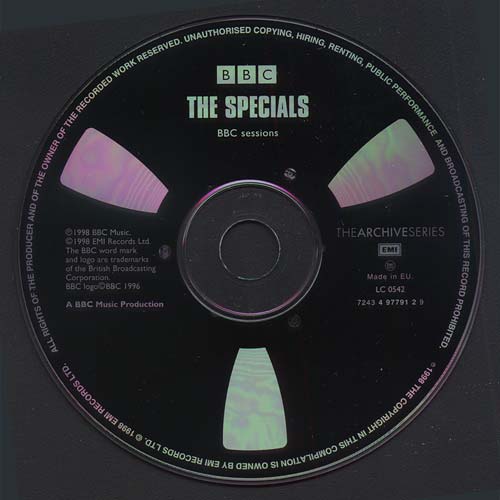 This CD gathers together all The Specials sessions for the legendary John Peel radio show. The show, and more importantly Peel, has been the champion of many musical 'movements' and 2 tone was no exception. Peel had broadcast sessions by all the major bands on the label but so far sessions by The Specials, The Selecter and Madness are the only ones to have gained official release.*

The first session on the CD was broadcast at the time when the band's debut single Gangsters was released and contains album faithful versions of Monkey Man, Concrete Jungle, Too Much Too Young as well session version aforementioned debut Gangsters. . The version of Too Much Too Young was soon to be dropped from the bands set and replaced by the more up-tempo version that was to give the band and the label its first UK No 1. The version of Concrete Jungle also manages to retain its "you're gonna get your f*cking head kicked in" intro which seems to have caught the censors off guard. The band was on tour at the time the session was originally broadcast but where able to listen the show in the back of the van in which they travelling in on an old borrowed transistor radio.

The second session contains both sides of the Rat Race single plus a studio recording of the Skinhead Symphony which looses none of its punch within the confines of a recording studio. In a matter of weeks the band returned to record yet another session for the show. This time the band recorded a version of Rico's one and only solo single for the label, Sea Cruise, which although one of the more musically accomplished tracks to be released on 2 Tone, had the unenviable title of being one of the few singles to miss the charts completely. The version of Stereotype sees Terry Hall sing the lyrics in the first person, which can only be seen as a heavy dose of irony given Halls lifestyle at the time was of that of a virtual hermit. His behaviour was later immortalised in Housebound by The Special AKA.. Racquel was a track that was often included in the bands live set but failed to make it onto vinyl in the UK.

After the band had split Peel continued to support Dammers next venture, The Special AKA. His radio show was one of the few which had the backbone to play singles such as War Crimes and Racist Friend when all other shows choose to ignore them. The flip side of Racist Friend, Bright Lights is included on this collection as are 2 of the bands more downbeat album tracks, Alcohol and Lonely Crowd.

Concluding this collection are 3 tracks which are listed as "unknown programme and date", all of which stay faithful to the commercially available versions. Friday Night, Saturday Morning appears to have been cleaned up for possible day time air play as it omits a large section of the last verse.

John Peel has to be credited for championing the label since its inception. He was often the first to play what was the 'latest 2 Tone release' and paid Gangsters the ultimate complement by playing it on his show for several nights in succession. He spoke fondly of the label and its achievements. He has said that 2 Tone was one of the few occasions where music was taken away from the major record labels and put in the control of genuine fans. He also paid tribute to The Specials by choosing Ghost Town as one of his tracks of the millennium and saying simply (of 2 Tone) "I wish there was something like it now".

*The 2012 re-release of The Beat's studio albums saw a Peel Session feature on each of the re-packaged CD/DVD editions.