Not that 2 Tone is an especially collectable label, but many releases have maintained a modest market value and some sometimes change hands for exorbitant prices. Here is a selection of some of the more interesting and hard-to-come-by releases on the label.

A release which for years, collectors were under the impression didn’t actually exist. This UK CD caught everyone off guard. Released at a time when just about every major label was putting its back catalogue on this new digital format, its rarity suggests that it was deleted just as quickly as it was released. Copyright reasons (similar to those stated on the Madness-less US version) are quite possibly be the culprits. 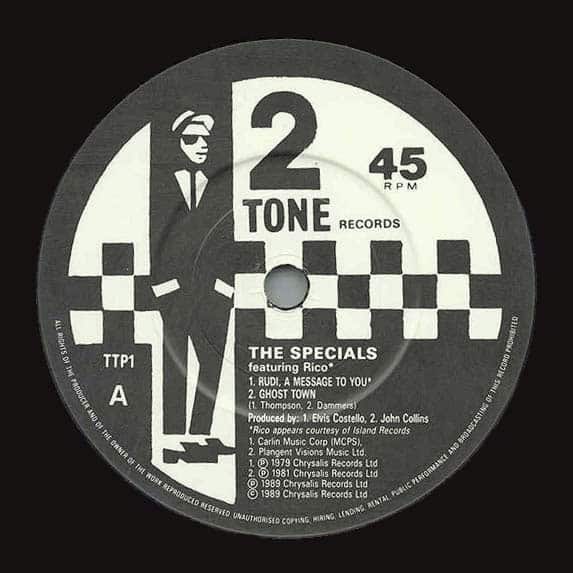 Perhaps the rarest of all 2 Tone records, this four track promotional EP was produced to plug the The Two Tone Story album. Numbers are very limited and prices sometime border on the ludicrous. It also offers another outing for Madness on the chequered label via the inclusion of the live version of ‘One Step Beyond’ from the Dance Craze soundtrack. 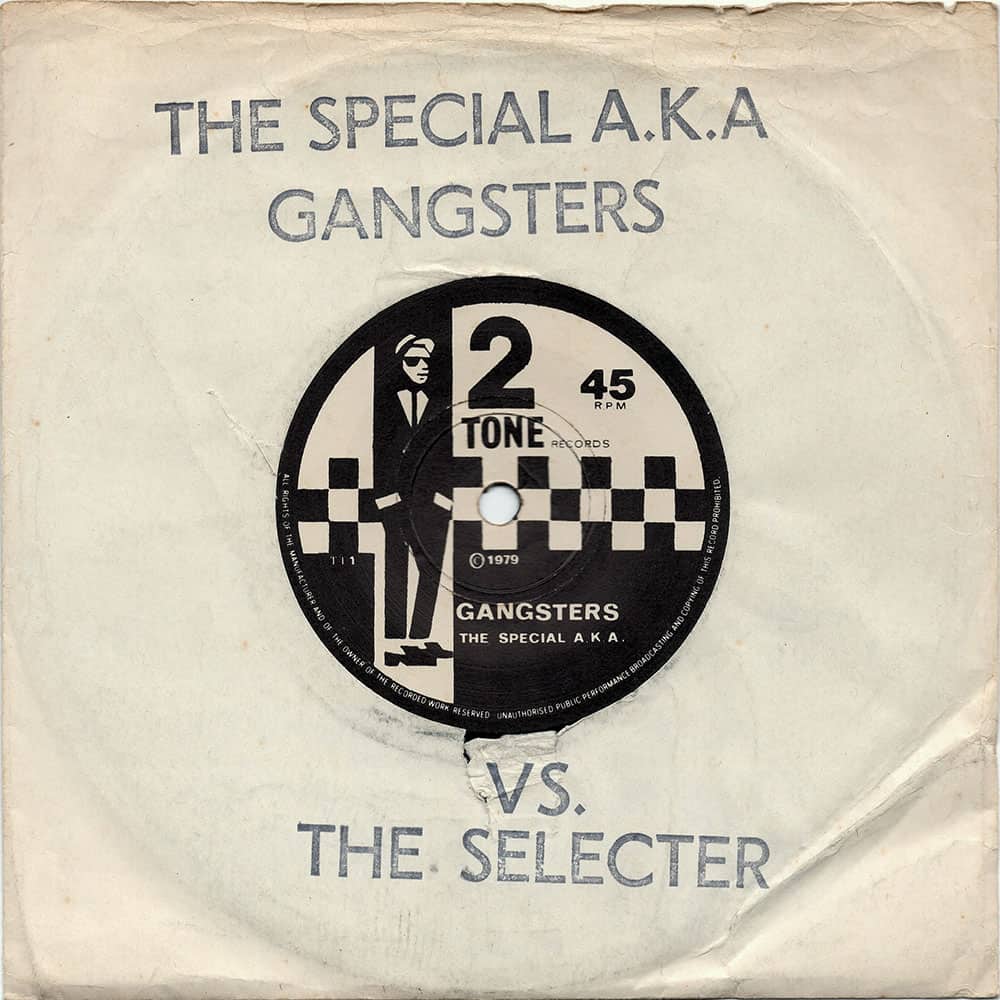 Hand stamped by the band themselves on flimsy paper sleeves very few of these have survived in presentable form over the years. Horace Panter, in his excellent account of his time as a Special, states that the first batch were stamped on much more robust cardboard sleeves, which the late John Bradbury obtained from the Virgin record shop where he waws still working at the time. The existence of a cardboard version of the stamped sleeve certainly ups the ante for completists. Given the simplistic nature of its design and the inflated prices this item can achieve on auction sites, it was perhaps inevitable that fake copies would emerge. These fakes are getting progressively better so potential buyers should be aware of, er… gangsters. 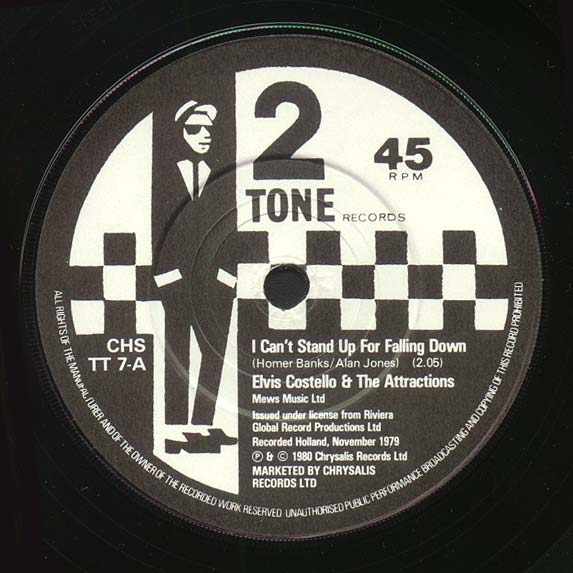 While there are slightly differing versions about just how exactly this single came to be withdrawn just prior to its release, there can be no doubt about its place on the list of 2 Tone collectables. Of the two versions pressed, one simply has CHSTT7 on the run out groove and the other has both the F-Beat number XX 1, along with two separate 2 Tone catalogue numbers, CHSTT7 (which is crossed out) and CHSTT8. The latter version refers to the copies Costello’s manager, Jake Riviera, had pressed after the planned release was shelved so that they could be given away free at gigs. Given that the track was to be the first single on the Riviera’s newly formed F Beat records it does seems strange that he would press up more copies (said to be 12000) on the 2 Tone label after having been forced to cancel the release. The F-Beat release ended up being a UK Top Ten hit for Costello.

Although this single often fetches a high price, it certainly doesn’t reflect its rarity. Since the beginning of online vinyl sales, the version with the F-Beat and 2 Tone catalogue numbers has consistently been available. Did those who attended the gigs, where copies were given away for free, really manage to hold on to enough mint copies to consistently flood the market with them..? Hardly. 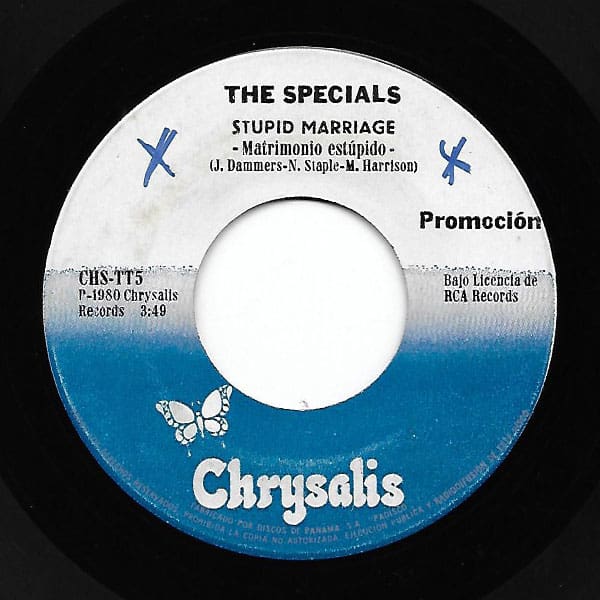 A Message To You Rudy Panama Promo 7″

One of the more obscure Specials releases. The band’s debut album was released in Panama and was promoted by this two track 7 inch, which offered up a unique outing for ‘Stupid Marriage’ on that format. 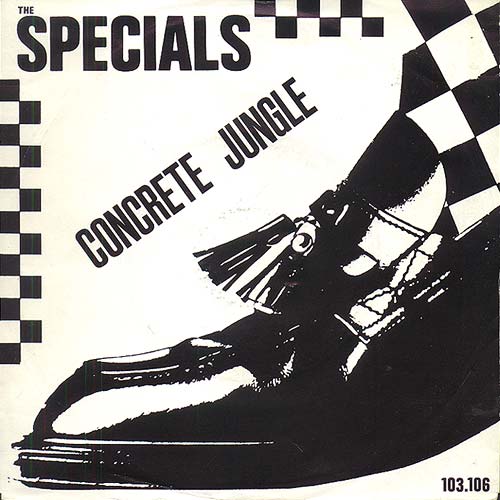 Holland was the sole country of choice for the release of a single from the Dance Craze soundtrack. With the studio version of Concrete Jungle once mooted as a possible UK single, this blistering live version would have no doubt sold well, but it wasn’t to be. The flip side is the first vinyl outing for Raquel, an old track from the days of the Coventry Automatics which had previously been recorded as part of a John Peel Session. The tasteful sleeve design only adds to its desirability. 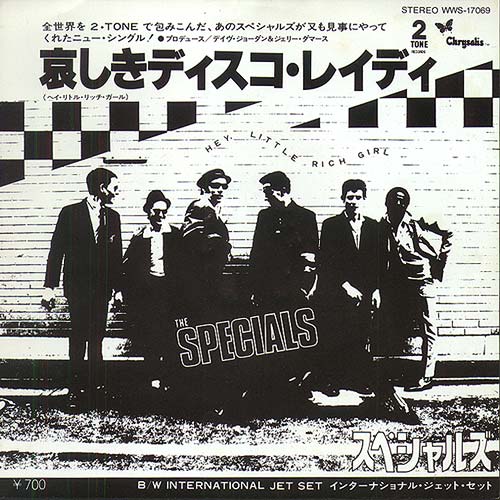 This curious choice of single to promote More Specials in Japan was housed in a unique sleeve and backed by the album version of International Jet Set. The sleeve which is really just a slip of paper printed on both sides features the tracks lyrics on the back in Japanse and English. Often Japanese single releases would come in a green EMI die-cut sleeve with a single sheet slip with the original artwork. The labels show dual catalogue numbers, one of which is basically the More Specials album cat. no. The unique sleeve and A side make this a favourite of collectors to pick up. 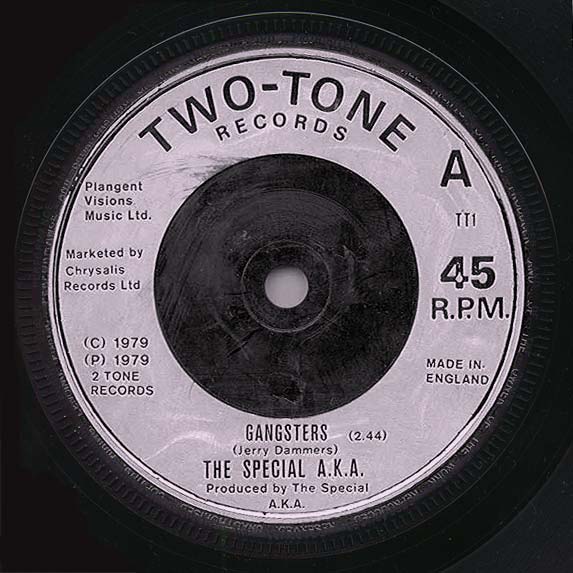 UK 2 Tone singles followed a fairly standard release sequence: an initial
limited number of paper labels followed by the standard silver plastic label. Gangsters is the one single which follows a slightly different pattern. The vast majority of copies, including re-issues in the early 1980s, were all pressed with paper labels with only a small amount, for whatever reason, pressed with a sliver plastic label. This version is very much the work of Chrysalis Records, and was restricted to a limited run. 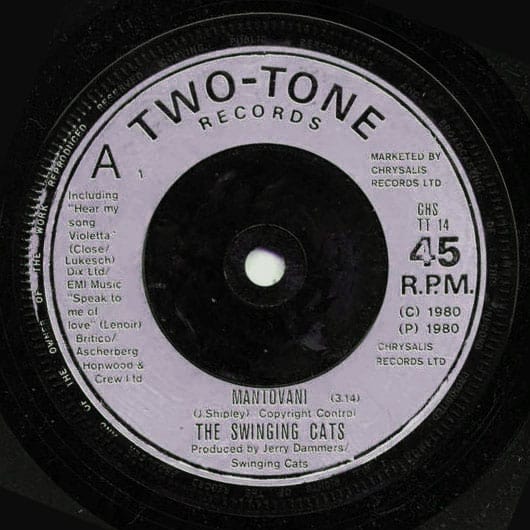 Mantovani sold in very limited numbers and as a result became the first 2 Tone single to completely miss the charts. Regardless of the quantity of records sold it obviously warranted a plastic label print run, but considering just how few have appeared for sale over the years it must have been a very limited release indeed. 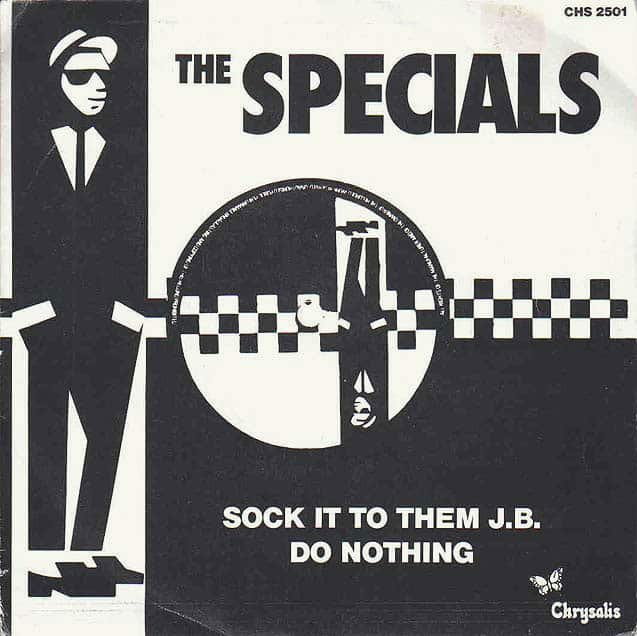 At one time this was reportedly in the pipeline for a UK release, but it didn’t materialise. It was released in what had become something of a generic French 2 Tone sleeve and slightly different take on the original Sock it to ‘Em JB title. The album version of Do Nothing is on the flip. 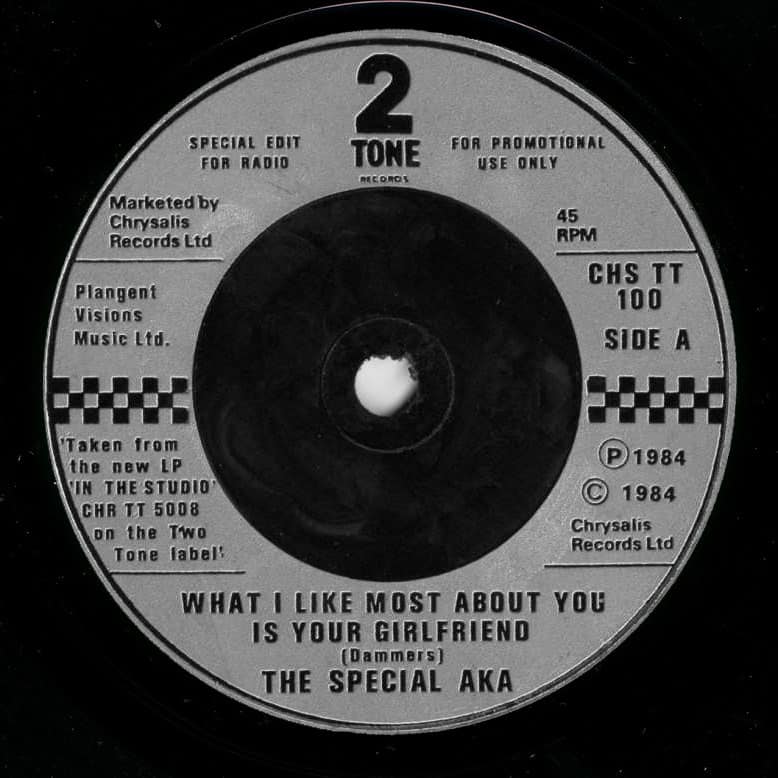 12” White label versions aside, very few 2 Tone singles were pressed as industry standard promotional copies. Too Much Too Young was issued as a two track single for jukebox and promotional use only, but this copy of What I Like About You Is Your Girlfriend is a much rarer item. And like the Too Much Too Young promo it has its own unique catalogue number, CHSTT100. 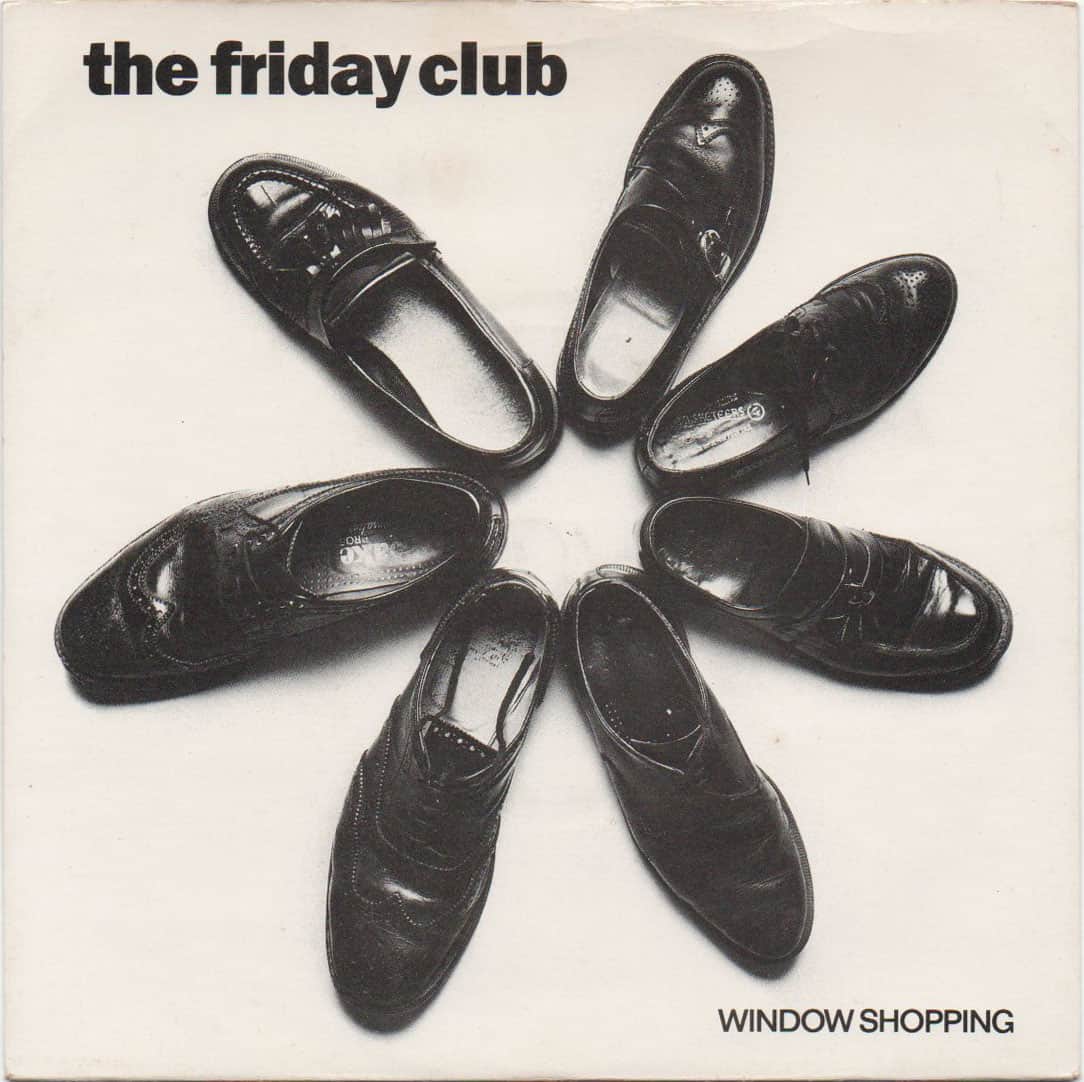 This is the penultimate single proper released on 2 Tone and it sold very poorly indeed. Even a support slot for Madness on their Mad Not Mad Tour couldn’t help boost its fortunes, hence the appearance on this list. One for the label completists. 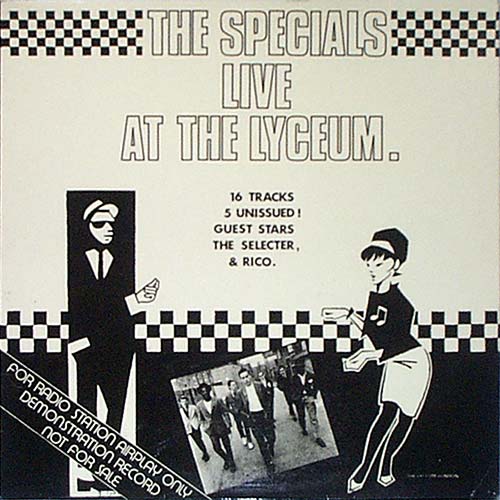 Live at the Lyceum

The debate continues as to the legal status of this LP. If it is a bootleg then it certainly stands head and shoulders above other such releases of the time in terms of quality and presentation. And it’s those very same traits which suggest that it is a promotional copy as stated on the sleeve. 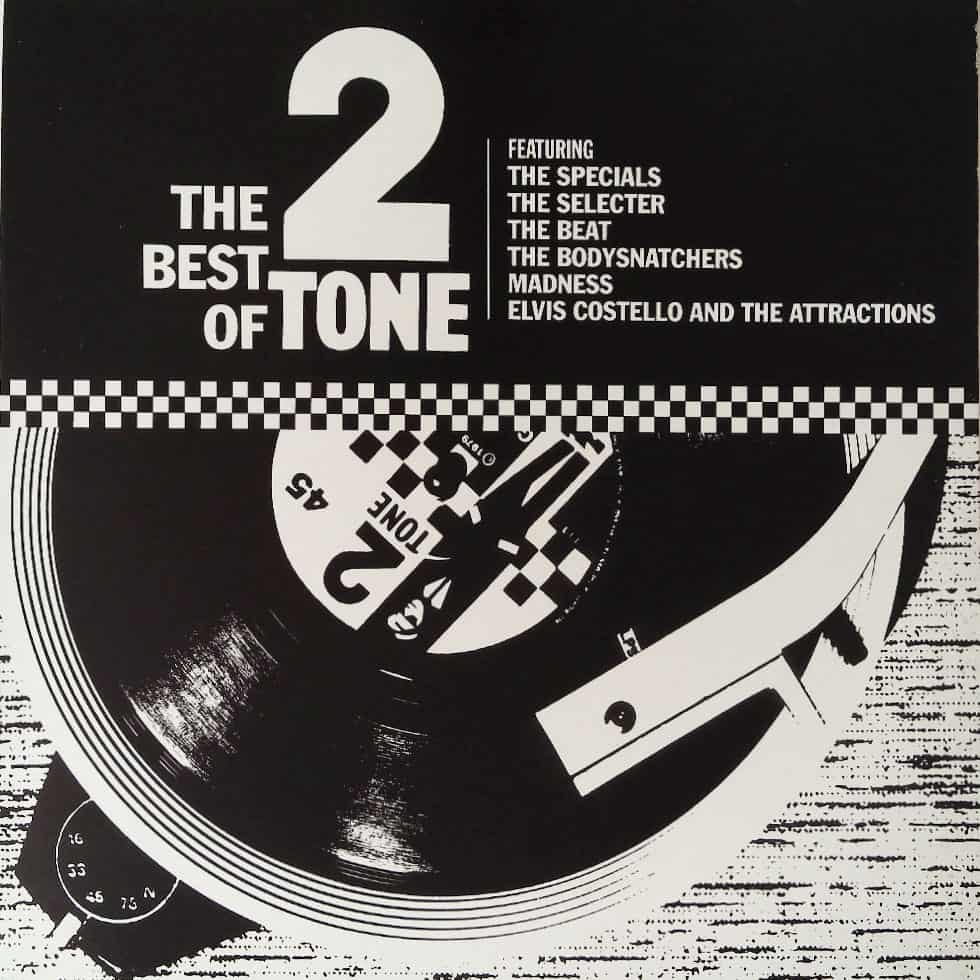 The Best of 2 Tone UK LP

Released at a time of a diminishing interest in vinyl as a format coupled with a failure to dent the charts make this rarest of all LPs released on 2 Tone. 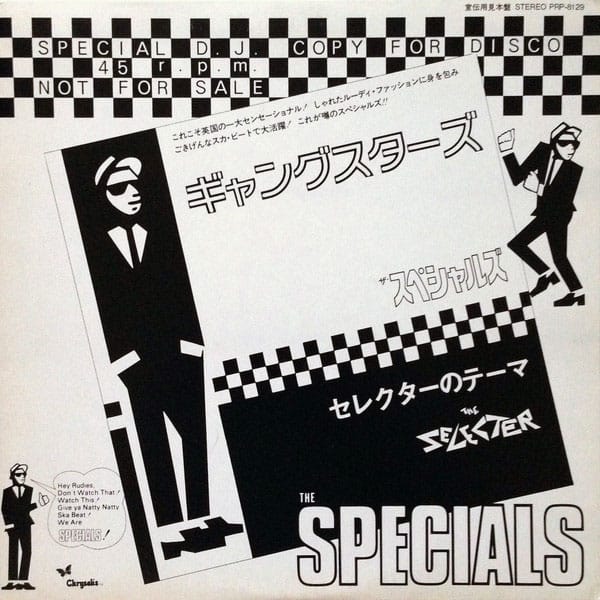 One of the more sought after Japanese releases suffers badly from overzealous artwork, something which was all too common among non-UK 2 Tone sleeves. Along with a contorted Walt it includes the cringe-inducing tag line “Hey Rudies, Don’t Watch That! Watch This! Give ya Natty Natty Ska Beat! We are Specials!”

For reasons best known to themselves, Chrysalis Records chose to release ‘James Bond’ in Japan as the title track of The Selecter’s third single. The Specials’ bassist Horace Panter makes a sneaky appearance on the rear sleeve of this four track 12″ promo. 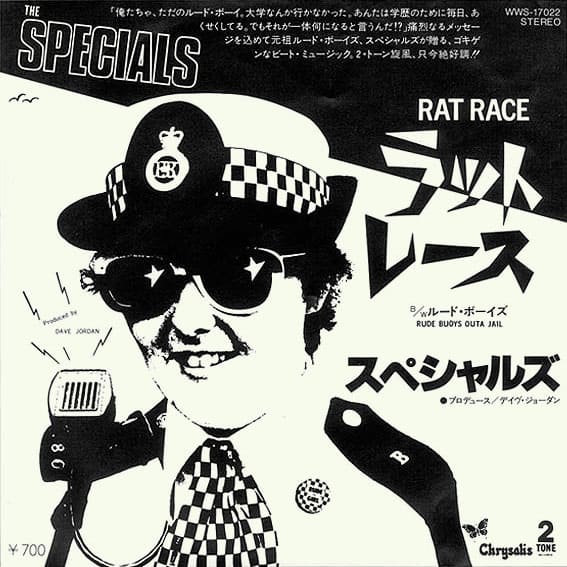 Packaged in a similar style to most Japanese 2 Tone singles complete with bilingual lyrics. The artwork features an image which was used to promote The Specials’ Seaside Tour in 1980. 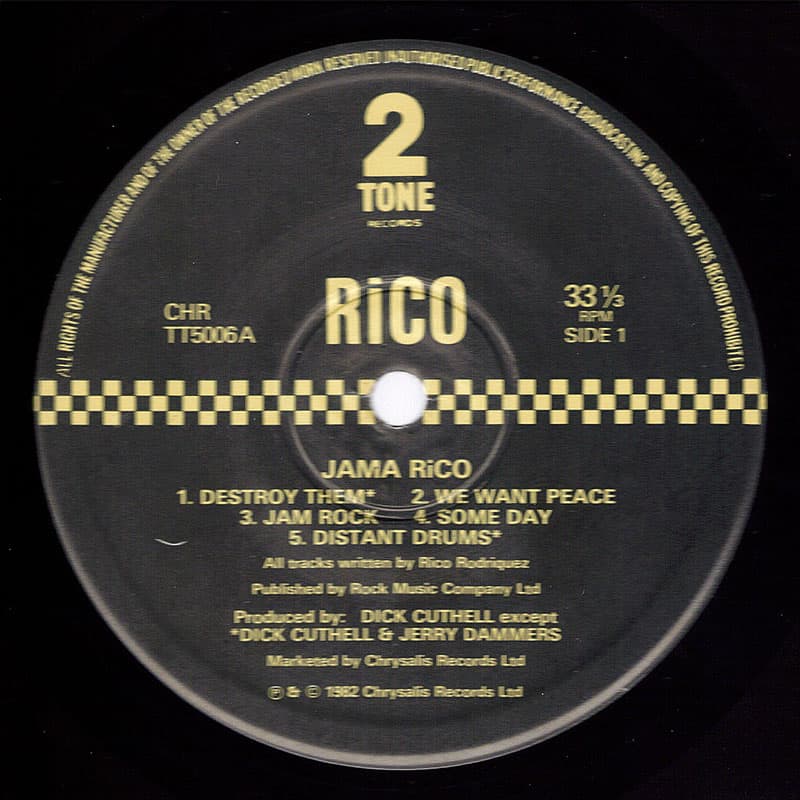 Although this album did not sell in any sort of noticeable amounts this brown and gold label version is evidence of a second pressing of the trombone maestro’s second long player for the label. This record then marks the transition from black and white labels to the later, more subdued brown and grey label design. 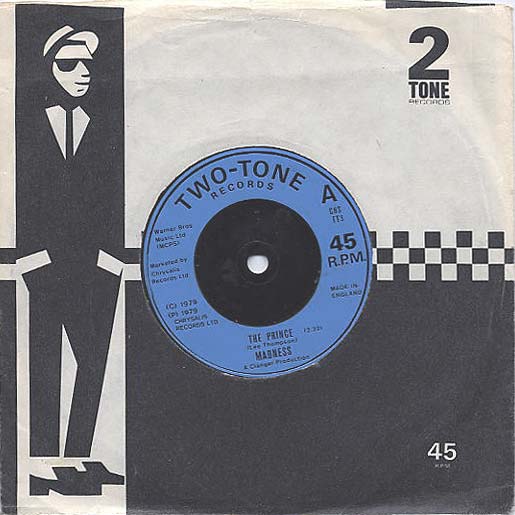 The Prince, On My Radio and Ghost Town have all appeared on blue plastic labels. No one is entirely sure what the reason is behind them, but some sort of mishap at the pressing plant seems as viable an explanation as any, especially given that a few other releases at the time suffered the same fate. For instance ‘Going Underground’ by The Jam was pressed with a silver plastic label, however blue plastic versions also exist. 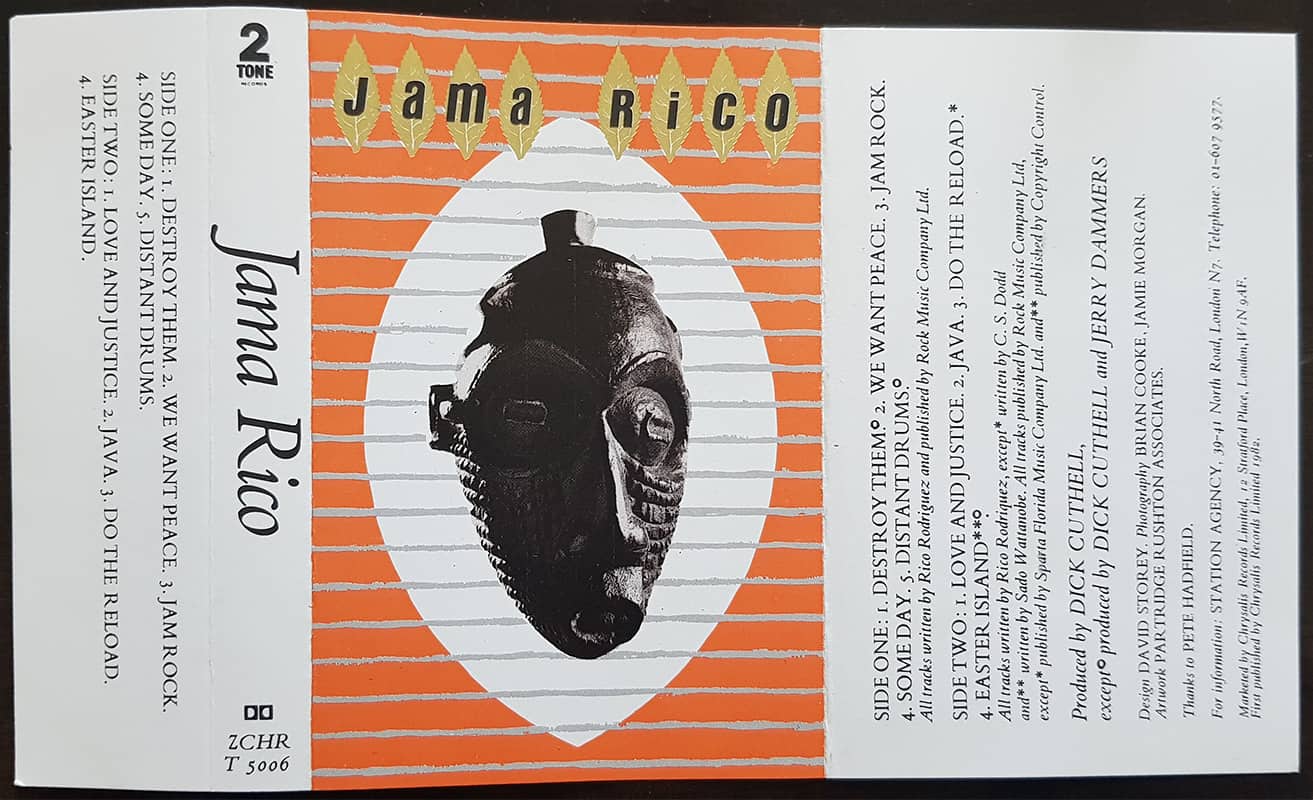 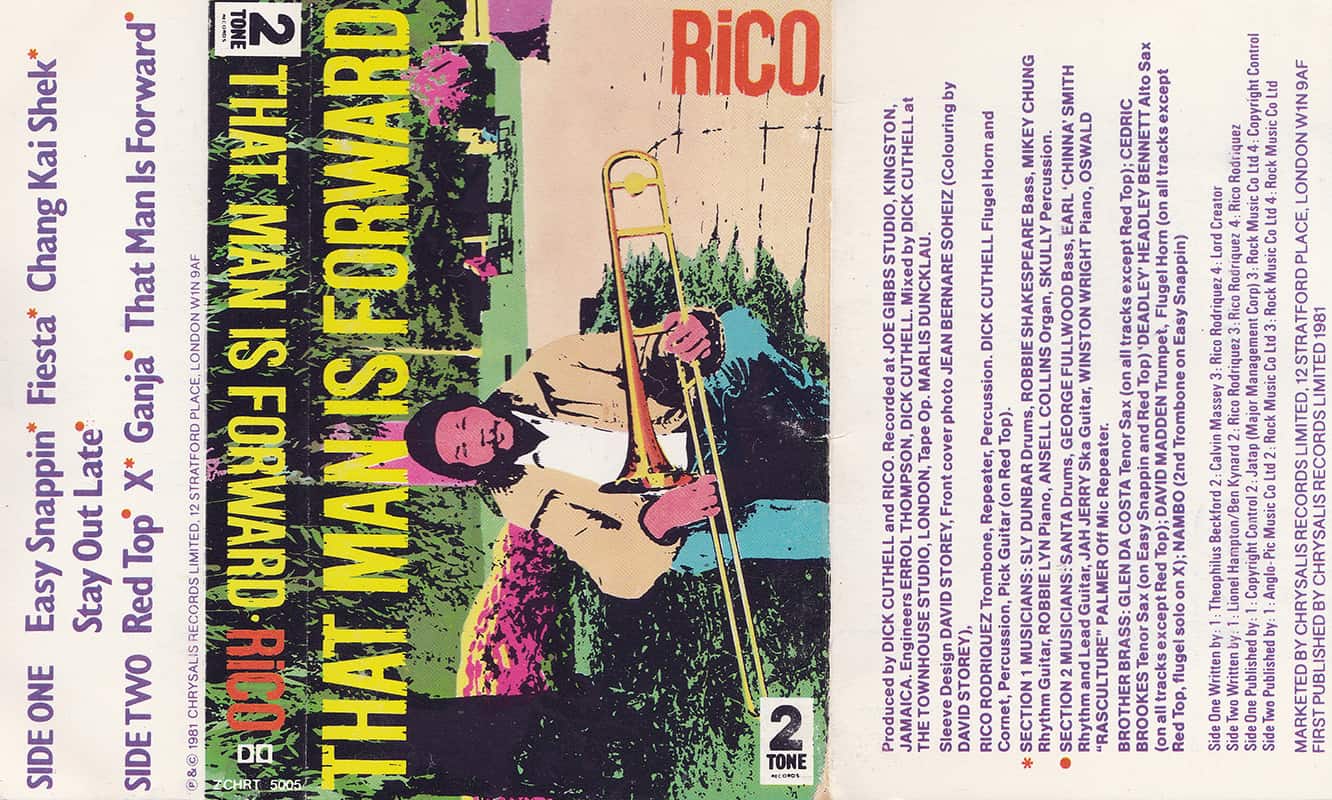 Cassettes may not be the top of every collector’s list but considering just how few copies both of these releases sold they certainly should be. Walt may not be present on JAMA but he is seen honing his trombone skills on That Man Is Forward. 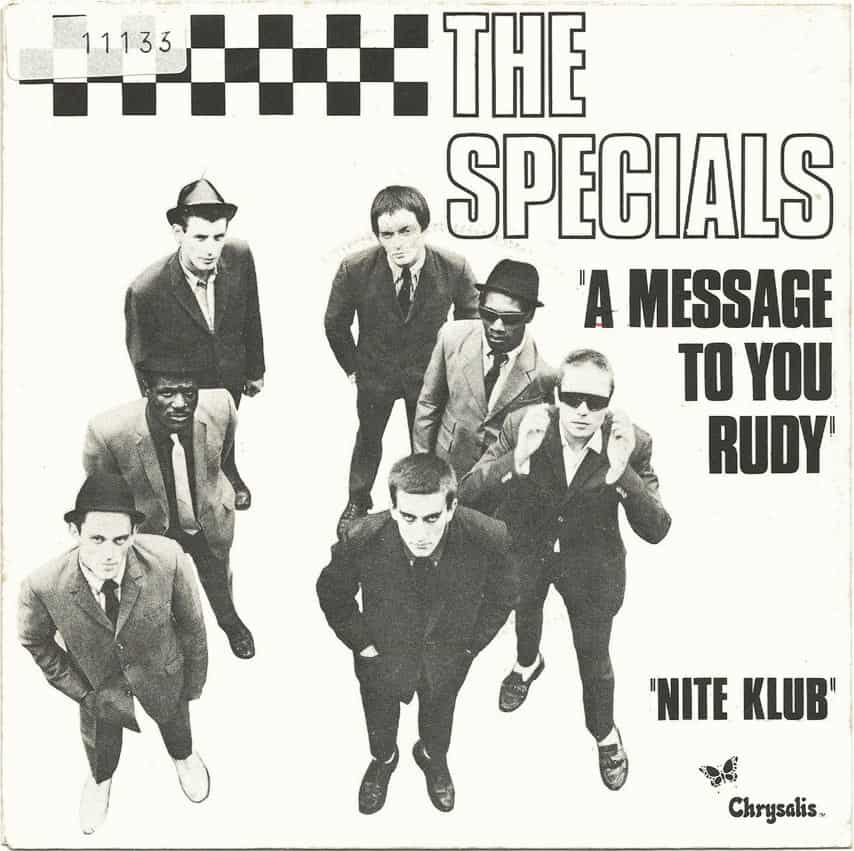 A Message To You Rudy French 7″

There were times when the overseas art departments of 2 Tone parent company, Chrysalis Records, displayed a certain lack of imagination. This, however, is one notable exception. Given how relatively easy most French 2 Tone releases are to get hold of, this beauty is much more elusive. 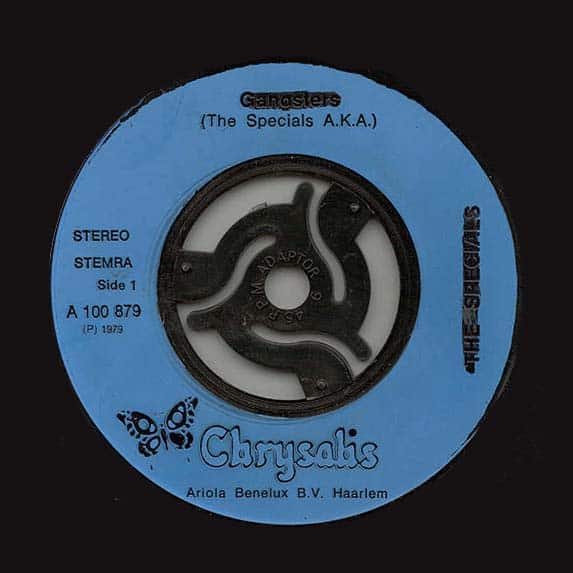 This version of 2 Tone’s debut release suffered the indignity of having a number of copies pressed with one of the most horrendous Euro pop tunes imaginable: Banana Split by Lio on the A side instead of Gangsters. It’s not known how many copies exist but thankfully there don’t appear to be too many.